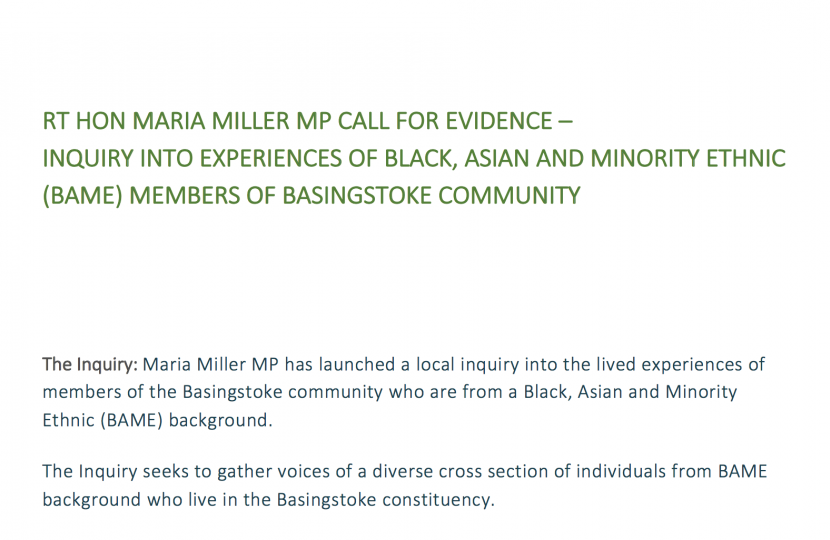 The inquiry was launched in June following the death of George Floyd, which resonated globally and in Basingstoke where an event was held by Basingstoke Unites Against Racism to stand against racial injustice.

The Inquiry set out to gather the voices of a diverse cross section of people in order to understand the range of issues faced by the BAME population in Basingstoke. Submissions were received from individuals and a range of local community groups.

Several themes were raised in the Inquiry’s evidence which show that BAME residents often experience discrimination in a range of settings and feel compelled to accept the racist abuse they receive. The inquiry found that the normalisation of this type of discrimination often impacted people’s mental health, wellbeing and confidence.

The Inquiry has reviewed its evidence with relevant public and private sector organisations for them to identify a plan to address the issues raised. Several large organisations and employers have signed the ‘Race at Work Charter’ in response to the findings of the inquiry as a commitment to improve equality of opportunity in the workplace. Organisations that have currently signed the charter in Basingstoke include: Basingstoke and Deane Borough Council, Boots, Fujitsu, Sainsbury’s, Sovereign and Vivid.

Speaking of the inquiry, CEO of Citizens Advice Basingstoke Graham Hatcher said: ‘As an independent charity providing free confidential advice, having heard first hand of discrimination,  and as a third-party hate crime reporting centre, Citizens Advice Basingstoke really welcomes the Inquiry’s work to gather the voices of BAME residents in Basingstoke. By listening to the lived experiences of BAME people locally, together we will have a better understanding of the importance of equality, no matter who we are.’

Basingstoke District Commander Karen McManus said: ‘There is no place for victimisation, bullying and harassment in Basingstoke, which is why I am pleased this Inquiry has highlighted areas that can be improved in order to make Basingstoke a better community for our BAME population.

‘Hate crime is something that is taken extremely seriously by Hampshire Constabulary and we would always encourage people to talk to us for support or advice. You can contact us by ringing 101 and you can also report online at www.hampshire.police.uk. In an emergency, always call 999.’

Several schools also worked with the inquiry, and welcomed its important findings:

Headteacher of Aldworth school Paul Jenkin said, ‘Aldworth school pupils shared their experiences and it was a sobering experience to realise how racism is still, sadly, a part of students' lives. The inquiry has galvanised our determination to challenge racism as a community and the school is developing new projects to ensure that racism and equality is seen as an issue for everyone.’

Jamie Carroll, Headteacher of St Bede's Catholic Primary School said, 'Basingstoke is a strong and diverse community which can only be strengthened further by the whole community standing together against racism.’

Headteacher of The Costello School Randall Jull said, “The Costello School, as part of Bohunt Education Trust (BET) recognises that challenging racism is part of its responsibility to broader society and the development of Basingstoke. Costello proactively encourages discussion and action on racism and other pervasive issues; our student led action group on Black Lives Matters is just one of several groups which promotes diversity and equality and we are incredibly proud of our current and past students, who have grown to be successful and caring members of society. We are committed to ensuring all students are not only aware of inequality and understand its causes and effects but are motivated to do something to change the status quo.’

David Moran, Executive Principal in the South West for The Ashwood Academy, part of the Catch22 Multi Academies Trust, said, ‘Basingstoke is an increasingly diverse community and as a school we stand united against racism.  Ashwood Academy and Catch22 proactively encourages discussion and action to ensure that all members of our community feel safe, valued and have their voices heard.”

The Bishop of Basingstoke, the Rt Revd David Williams also praised the inquiry’s work: ‘I am immensely encouraged that so many members of the BAME community came forward to share their lived experiences. The evidence gathered, together with the results of the discussions, will ultimately enable the relevant organisations to work together towards making Basingstoke a positive environment for everyone who lives and works here.’

Imam Mohammed Achbib also commented, ‘It is so encouraging that many members of the BAME community came forward to share their experiences. I hope everyone in Basingstoke can learn from the results and move towards a society where we are all more confident to stand together against Racism.’

In its gathering of evidence, the BAME inquiry also heard from local Basingstoke community groups, including the Basingstoke Hindu Society. The society’s Chair, Kishor Patel said, ‘The Hindu community engaged proactively in the Inquiry. Basingstoke is a strong community which can be strengthened further as it strives to combat racism.’

Poonam Gurung (President of the Non-Residents Nepalese Association) and Om Gurung (President of Basingstoke Nepalese Community) both supported the inquiry in a joint statement: ‘The Nepalese community was delighted to take part in the Inquiry. We are encouraged that the results can be used in a constructive way to ensure that Basingstoke is a great place to live for everyone.’

Speaking of the inquiry, Maria said, ‘My thanks go to all the community groups and BAME residents in Basingstoke who submitted evidence to the inquiry and spoke so honestly of their experiences. Thanks to their contributions this body of work gives organisations in Basingstoke, and each of us in the community, a better understanding of what it is like to be a BAME person living in Basingstoke.

‘A better understanding needs to go hand in hand with action. The Inquiry has already received responses from public services such as Schools and the Police and these are included in the report. Can I thank the organisations that have engaged so readily.

‘Basingstoke is no different to other towns in England when it comes to issues of race and racism. But as well as protesting for race equality we now have an opportunity to take real action. We have had the confidence to ask whether there is more we can do ourselves.  And the answer is firmly yes.

‘I want Basingstoke to be a great place to live, for everyone regardless of their ethnicity, so I will hold an update with the relevant public services and organisations in the Spring. In the meantime, I will continue to work to help ensure that the issues raised are taken forward, to make our community fairer and more equal for all.’

Basingstoke MP, Maria Miller, welcomed the news that Sovereign Housing Association have signed up to the Race at Work Charter, drawn up by Business in the Community (BITC). It includes a public commitment to improving outcomes for BAME employees at work.

Bishop of Basingstoke supports the inquiry

Maria Miller MP has launched a local inquiry into the lived experiences of members of the Basingstoke community who are from a Black, Asian and Minority Ethnic (BAME) background.