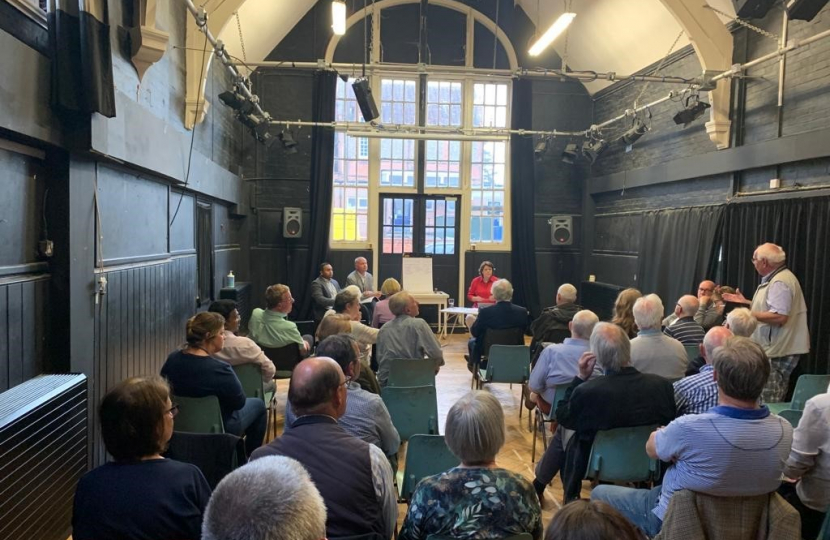 As part of her regular series of Basingstoke community meetings, Maria Miller MP provided residents with the opportunity to discuss the Local Plan with the Leader of Basingstoke and Deane Brough Council Cllr Simon Bound and Cllr Jay Ganesh, Cabinet Member for Planning and Infrastructure.

The audience voiced their concerns about a wide range of issues that need to be covered in a new Local Plan including house building numbers, infrastructure delivery and the environmental impact of development.

Maria commented: "Basingstoke has overbuilt, way above the national and SE averages for more than 40 years. We are an exception in comparison to almost any other community in the Country with perhaps the exception of Milton Keynes. Our house building levels are well in excess of other Local Authorities, including nearby authorities whose residents have had to rely on Basingstoke to build the homes they need for their families. We need a new Local Plan that gives Basingstoke a rest from continuous large scale house building, to enable our new communities to become part of the established community of Basingstoke and to ensure we can properly identify where our infrastructure is under strain."

“I have met Government Ministers who have confirmed that the centrally set House Building formula is a starting point and must be revised to reflect local circumstances. Basingstoke is exceptional in having consistently built homes for more than four decades. These exceptional circumstances need to be incorporated into the Borough Council's thinking and the house build figure, already rejected by Councillors, should be revised accordingly.

“The local Plan is more than just raw house building figures. The new plan must also create a level playing field with neighbouring areas; the current Local Plan has a Basingstoke Council set housing density target that is deliberately set far higher than neighbouring authorities. It makes Basingstoke cheaper for developers to build houses, without evidence that this leads to lower sale prices for buyers. This policy needs to be reconsidered to see if it is in the best interests of residents rather than housing developers.

“It was clear from Residents that they have major concerns about the direction of travel when it comes to development. Pressure on our valuable resources such as Water and Wildlife were highlighted. It was apparent that residents feel that our integrity of our town and rural Communities is under threat given the level of house building over such a long period of time.

“I would encourage residents to take an active role in shaping our local plan -we all have a part to play.”

Maria Miller MP established Basingstoke Community Chats to bring together residents in the Basingstoke Constituency, to hear from experts, support positive discussions on things that matter locally, and to understand how we can all play our part in helping support change. Anyone can sign up, come along to listen, and share their thoughts on positive change for the future of our community. Details of coming events are posted on Maria’s Facebook page @Maria4Basingstoke, on her website (maria4basingstoke.co.uk)with tickets booked in advance on Eventbrite.