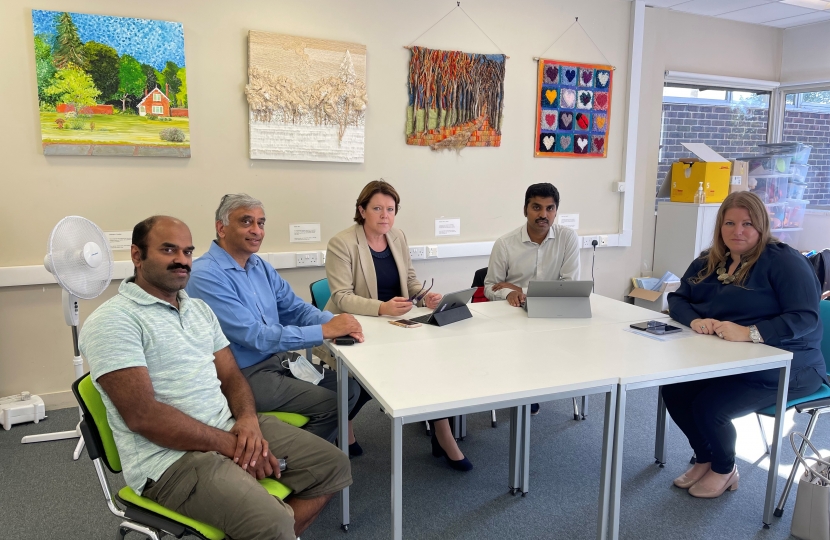 Maria said, “Small and medium sized businesses are the lifeblood of Basingstoke; and it is independent shops and restaurants that the community often values most. The message from local retailers to our Police and Crime Commissioner is clear, they value the work done by Hampshire Police and want to see some of the extra 365 Police Officers already recruited into Hampshire Constabulary deployed into our town to help tackle crime.”

Concern was expressed about the impact of anti-social drinking and unlawful drug taking in and around the town. The Borough Council has consulted on introducing a Public Spaces Protection Order (PSPO) which would prohibit antisocial drinking in the town centre and other places including Kings Furlong, Grove and Norden. Licensed events held within the PSPO would not be affected.

Maria went on to say: “It is important that every measure available is used to keep our town centre a safe place. The Borough Council considering introducing a PSPO is important as is reporting crime to the Police so that officers can be deployed to patrol where they are needed most. In some cases the Police decide not to investigate further and that can be extremely frustrating for residents. So, I am pleased to hear that the Police and Crime Commissioner is looking at how our local Police Force can better explain how crime reports are used and how the Police respond to residents on the actions that have been taken.”

Police and Crime Commissioner Donna Jones commented;  “I very much valued talking to local retailers and hearing about their concerns. It is vital that crime is reported to the police. If people want to report crime anonymously they can use crime stoppers.  crimestoppers-uk.org or call 0800 555111.  Fraudulent emails or texts should also be reported via Action Fraud Tel 0300 123 2040 or online www.actionfraud.police.uk

It is vital that retailers and the public have confidence in reporting crime and I am keen to ensure that there is effective policing for the business community.”