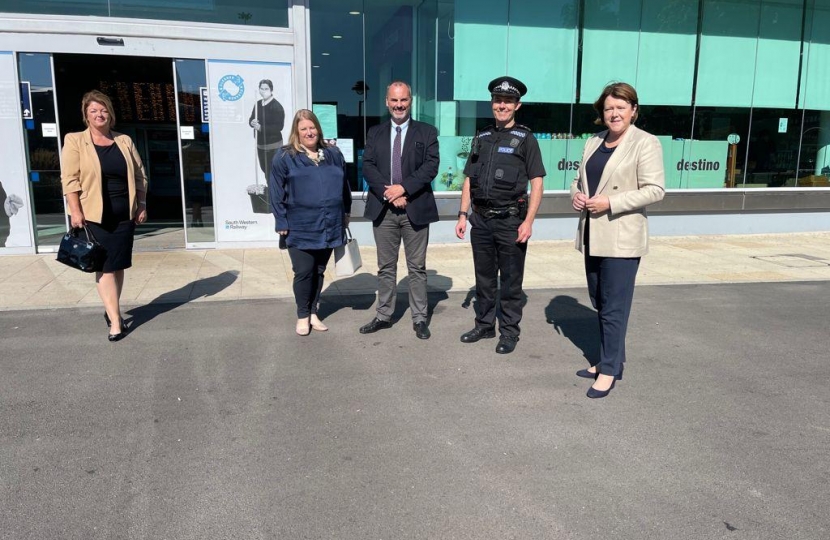 County Lines is where illegal drugs are transported from one area to another, often across police and local authority boundaries usually by children or vulnerable people who are coerced into it by gangs. The ‘County Line’ is the mobile phone line used to take the orders of drugs. Basingstoke is one of the top centres for County Lines due to its proximity to London and transport network. High demand for drugs is the driving factor behind County Lines.

Donna Jones said, “It was extremely helpful to meet in Basingstoke to see how the Hampshire Constabulary and the British Transport Police are working together to tackle County Lines. It was good to see a range of agencies working at a local and national level to ensure there is a unified approach to tackling drug related crime.”

Maria said, “Police intelligence shows that gangs are using children and vulnerable adults to transport drugs using the local rail network with Basingstoke Station used as a gateway for transporting drugs into Hampshire. Last September, I witnessed this firsthand during the British Transport Police (BTP) operation at Basingstoke station when 2 young people were caught within an hour of the Police operation starting. The action being taken by BTP, working with the local Hampshire Constabulary, is sending a clear signal  that gangs can no longer rely on our railway network to transport drugs."

"Drug taking is a criminal offence and far from a “victimless crime”. Anyone in Hampshire who buys or uses drugs like cannabis and cocaine is supporting criminal organisations that exploit children as young as 13 to carry the drugs into our county."

"I would urge anyone using the train network should look at The Children’s Society #LookCloser campaign to know the key signs to spot a child being used to traffic drugs into our town and for details of how to contact the British Transport Police.”

“Clamping down on this criminal activity nationwide requires a multi-agency approach, and we will continue to work with our partners to develop our intelligence picture and bring offenders to justice.

“Organised criminals target the most vulnerable members of our society, exploiting them to move their commodities between locations via the railway. Our dedicated officers are on the network daily to identify and safeguard these individuals – moving them out of harm’s way.