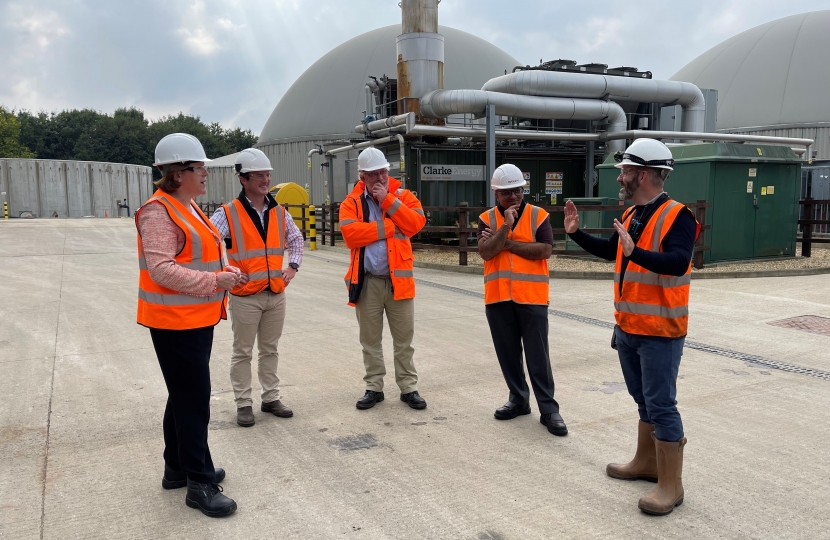 Maria Miller MP visited Biogen with local Councillors Samir Kotecha and Juliet Henderson, to meet the people running the plant and to hear about the changes that have been made in the past 2 years by the new operators to start to tackle odour problems & traffic concerns connected with the plant.

Maria and the councillors met with commercial Director Simon Musther and his team. Biogen operates the Anaerobic Digester plant at Dummer which processes food waste to produce Biogas and Biofertiliser. Biogen acquired the plant in 2018 from Tamar.

Maria commented; “ It has been helpful to hear about the specific changes that have been made by Biogen to reduce traffic congestion and reduce odour from their operations so that the plant causes less disruption for local residents.

“Traffic to and from the plant is strictly controlled within set times. Odour has also been a cause of concern to residents and the company have invested in significantly upgrading the plant since acquisition, and introducing monitoring to reduce Odour Levels. As well as reducing landfill it is important to acknowledge the plant produces power for 2000 homes and digestate fertilises 1,600 acres of land.”

Samir Kotecha commented. “ I am grateful that Biogen has worked hard with residents to address their concerns and is committed to meeting regularly with me, other councillors and residents. Anyone interested in hearing more about the work of the Plant can do so through the Residents monitoring group and can email me for more information at Cllr.Samir.Kotecha@basingstoke.gov.uk”