Boosting hedgerows in Basingstoke is a ‘win-win-win’ for communities, nature and the economy 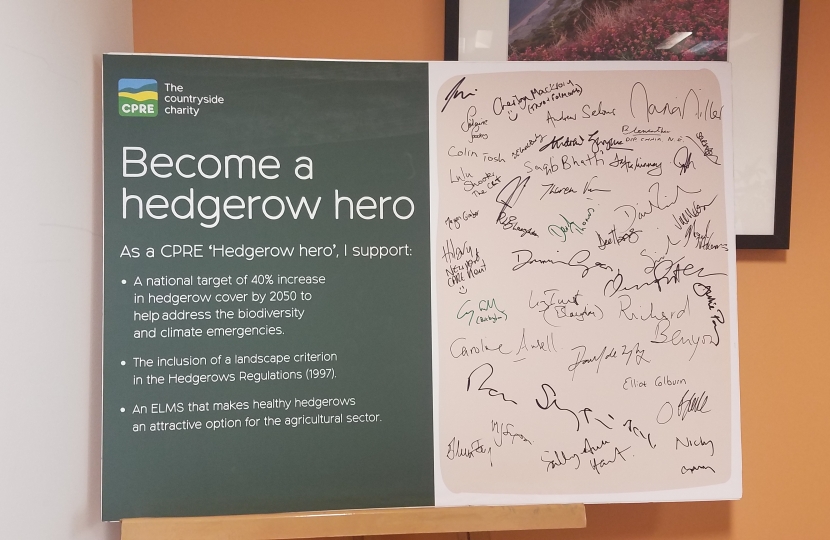 Basingstoke’s MP, Maria Miller was delighted to attend CPRE’s hedgerow report launch event in Westminster.  The Climate Change Committee (CCC) recommends that the extent of our hedgerow network should be increased by 40% to support the UK government’s goal to reach net-zero carbon emissions by 2050. Now, new research conducted by the Organic Research Centre, on behalf of CPRE, has found that the benefits of setting and achieving this target would not only be for the climate and nature, as 40% more hedgerows would result in over 25,000 more jobs in hedgerow planting and maintenance in both rural and urban areas. If the right hedgerows are planted in the right place, for every £1 invested in hedgerow planting, as much as £3.92 is generated in the wider economy.

Maria signed up as a Hedgerow Hero MP , joining strong cross-party group of voices advocating for hedgerows in parliament.

Maria said, “With over 140 people in attendance, it was fantastic to see such a strong show of support for restoring our hedgerow network by policymakers and those across both the environmental and agriculture sector. I support CPRE’S work to boost hedgerows in Basingstoke and delighted to join strong cross-party group of voices advocating for hedgerows in parliament.”

Commenting on the research, Crispin Truman, chief executive of CPRE, the countryside charity, said:  ‘It is almost impossible to define the enormous value of our hedgerow network – just as our arteries and veins supply our bodies with nutrients and oxygen, the UK’s hedgerow network defines many of our rural landscapes and must remain healthy to benefit  villages, towns and cities. Our research shows that investing in our hedgerows is a win-win for climate and people in both the countryside and urban areas.

‘Sadly, half of our precious hedgerows have been ripped from the landscape since the Second World War and we’ve seen a huge decline in nature and soaring carbon emissions. There is a lot of work to do. Local authorities can support community groups to plant more hedgerows while farmers can help by letting hedgerows grow taller, and bushier.

‘But we know the government has the biggest part to play in unleashing the full potential of hedgerows. That’s why we’re calling on Ministers to set a target to increase the hedgerow network by 40% by 2050 with improved protection for existing hedgerows. This would be seen as a bold step by the UK government in the lead up to hosting the international climate summit to support nature’s recovery, help grow us out of the economic downturn and tackle the climate emergency head on.’

In its expanse, the hedgerow network is our largest, most connected ‘nature reserve’. Healthy hedgerows are teeming with life and vital for nature. One in nine of all vulnerable species in the UK are associated with hedgerows. These include the hazel dormouse, the much-loved hedgehog, whose decline has been closely associated with hedgerow loss, and the brown hairstreak butterfly, which lays its eggs on blackthorn, and is particularly common in hedgerows.

But shockingly, we have lost around half of our hedgerows since the Second World War and they are still in decline. It is clear that continued hedgerow loss will hasten the decline of these species but increasing the hedgerow network will aid nature’s recovery.

Lord Deben, Chair of the Climate Change Committee, said: ‘What was a determination to make land more productive in order to feed our people during and after the war has led to indiscriminate destruction of our hedgerows. Spurred on by Deficiency Payments and the Common Agricultural Policy, our yields rose and our wildlife diminished.

‘Since then, there has been a growing shift in thinking as farmers and landowners, environmentalists and rural communities  recognise the role and value of hedgerows. Reintroduction and proper maintenance of hedgerows transforms the all too sterile prairie land into the countryside, which for long we have loved. But, as this report shows, this is not about romance – the hard facts are that hedges contribute to profit as well as to wellbeing.’

Basingstoke MP Maria Miller has welcomed the opening of new skate park at War Memorial Park, which will be officially opened at an event on Saturday 30 October from 12 noon until 4pm.