Equality Act 2010: Women and Equalities Committee calls for fundamental shift - individual approach “dates back to the 1960s” and is not fit for purpose 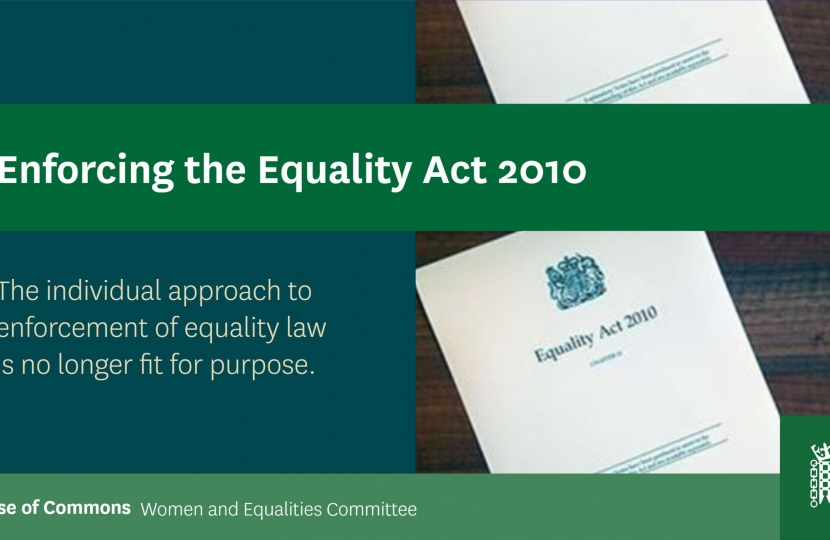 The individual approach to enforcement of equality law is no longer fit for purpose, says the Women and Equalities Committee in the report of its year-long inquiry, published today.

The report argues against relying on the individual approach, dating back to the 60s and 70s, and recommends that this must be replaced by a new approach which provides a sustainable deterrent and tackles institutional and systemic discrimination. While individuals must still have the right to challenge discrimination in the courts, says the Committee, the system of enforcement should ensure that this is only rarely needed: this will require a fundamental shift in the way that enforcement of the Equality Act is thought about and applied.

“Creating a fairer society where people are not treated differently because of the colour of their skin, their sex, gender, sexuality or religion is central to British values. In our first four years, in inquiry after inquiry the Women and Equalities Committee has heard abundant evidence of the destructive impact discrimination has on people’s lives, as well as the heavy cost that puts on society and public services. One thing is absolutely clear: the burden of enforcement must shift away from the individual. We need a fundamental shift in approach, and our report shows how to do it.”

The Committee’s work in a range of areas has shown that individuals have difficulties enforcing their rights under the Act and has questioned the effectiveness of the EHRC: inquiries on pregnancy and maternity discrimination, transgender equality, disability and the built environment, workplace dress codes, older people and employment and sexual harassment in the workplace all identified widespread problems with enforcement.

The report’s main recommendations are:

“Employers and service providers are not afraid to discriminate, knowing that they are unlikely to be held to account. We need a critical mass of cases to build a culture where compliance with the Equality Act is the norm.”

“The EHRC must overcome its timidity. It has unique powers, limited resources and must use them for maximum impact. It should make regulators, inspectorates and ombudsmen not only key partners in creating a critical mass of enforcement action but also key targets for enforcement action when those same regulators, inspectorates and ombudsmen fail to meet their own equality duties.”

The Committee recommends that the Government’s Labour Market Enforcement Director should play a fundamental role, alongside the proposed new single labour market enforcement body: if such bodies acted consistently on their obligations, then the EHRC could become the strategic enforcer that it should be.

Finally the report recommends that the Government must also make this fundamental shift in the way that enforcement of the Equality Act is thought about and applied. Committee Chair Maria Miller said:

“Above all, the Government must act on its own obligations. It must embed compliance and enforcement of the Equality Act into its most significant strategies and action plans. That it has not yet done so in its recent efforts to improve the quality of work – where stopping discrimination is so clearly an essential precondition to any improvements – beggars belief. Our report sets out exactly what needs to be done, and we look forward to hearing how the Government plans to act on this".