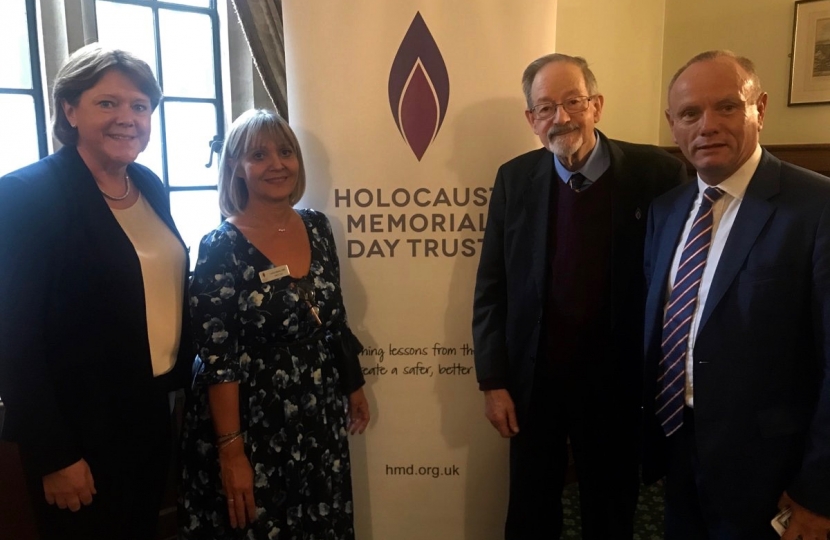 Local MP for Basingstoke, Maria Miller listened to Helen Aronson who survived the Holocaust as a teenager, at the launch event in Parliament for Holocaust Memorial Day 2019.

Holocaust Memorial Day, held on 27 January each year, remembers the six million Jews murdered during the Holocaust, and the millions of people killed under Nazi Persecution and in subsequent genocides in Cambodia, Rwanda, Bosnia and Darfur. The date marks the anniversary of the liberation of Auschwitz-Birkenau, the largest Nazi death camp.

Survivor of the Łódź ghetto in Poland, Helen Aronson said: ‘It is vital that we do everything in our power to ensure that these things never happen again, anywhere in the world. Children must be allowed to grow up safe and secure and not be wrenched from their homes, like I was.

That’s why it is so important that you, as members of parliament are here today and that we make a commitment to mark Holocaust Memorial Day every January.’
Holocaust Memorial Day Trust (HMDT) supports HMD activities across the UK and chooses a theme each year. The theme for 2019 is Torn from Home.

Maria said: ‘The experiences of survivors such as Helen remind us about the importance of marking Holocaust Memorial Day – a day when we remember the millions of people who were affected by the Holocaust and subsequent genocides. I want to encourage everyone in Basingstoke to mark HMD on 27 January 2019.’

Olivia Marks-Woldman, Chief Executive of Holocaust Memorial Day Trust, said: ‘As the world becomes more fractured and divided, we need to come together to learn from genocide – for a better future.  We can all mark HMD, and the resources HMDT provides enables individuals and organisations to organise their own HMD activity.’