Local MP calls for an action plan to improve the consistency and robustness of the data on inequalities facing Black, Asian and Minority Ethnic people in the UK. 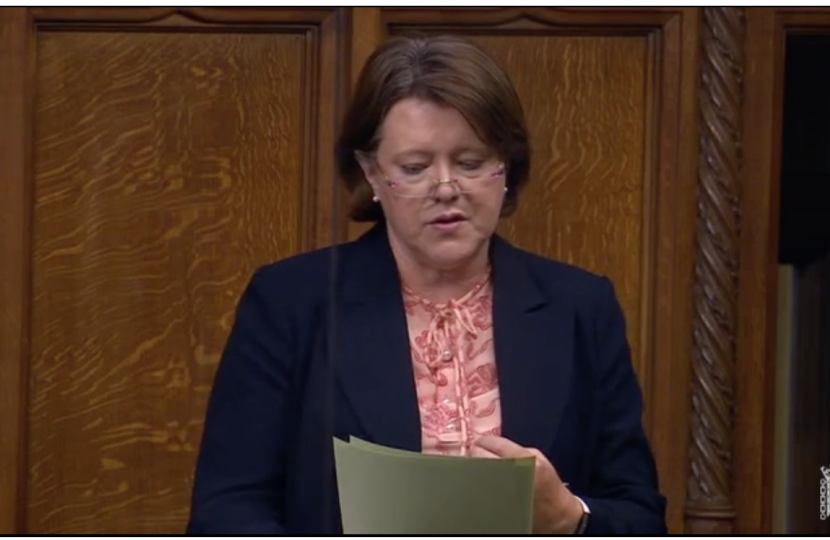 Building on the work that Maria did as Chair of Women and Equalities Select Committee on Race Disparity Audit Inquiry, which revealed that the ability of the Audit to lead to tangible change is put at risk by a lack of consistency in how data is collected across Government.

The Race Disparity Audit uses published Government data to examine how people of different ethnicities are treated across public services in areas including health, education, employment and the criminal justice system.

The Committee’s inquiry found that some datasets are detailed but the categories used to collect information vary widely, making it difficult to analyse and reach conclusions on what action needs to be taken. Without consistent information too many government departments will remain unaware of the uncomfortable truths they are responsible for tackling.

Maria said: "I pay tribute to Dawn Butler for calling for this debate, and to the Backbench Business Committee for granting it. It is a great pleasure to follow my right hon. Friend Caroline Nokes, who is now the Chair of the Women and Equalities Committee; I commend her for all the work that she is doing.

I also pay tribute to all the NHS workers in Basingstoke, in Hampshire and throughout the country who, despite all the headlines and despite the fear, kept going. I think particularly of those from different black and ethnic minority groups, who face particular fear and challenges. We should pay tribute to them in this debate.

My right hon. Friend the Member for Romsey and Southampton North talked about the fact that when we discuss issues affecting BME communities, we often talk about employment and education. In this pandemic, it has been the differential impact on health that has shocked us all to our core. She is right that we need to give people a voice to speak out on that.

It was particularly concerning for me when I was approached by individuals in my constituency from different sectors of my thriving and vibrant BAME community about their fears and about what this meant to them. It struck me that the information available was so vague and general that it was difficult for me to respond to their questions. One particular individual from my Indian community asked, “Does this mean I’m more at risk?” I could not answer that, so I looked carefully at the research from Public Health England when it came out. I will come on to that in a moment.

We have to be careful when we look at this issue. I know that the hon. Member for Brent Central will agree that we have to take great care not to simply treat BAME communities as one homogeneous group. We run the great risk of coming to the wrong conclusions if we speak as though they all have the same challenges—indeed, if any of us have all the same challenges. We know as Members of Parliament that our opportunities in life are too often determined far too much by our socioeconomic backgrounds, by the occupation of our parents or by the healthcare that we receive throughout our childhoods. It is the same for every group in our society. The way that we can address this is by understanding each group individually, and having accurate data is important in trying to disentangle and understand this particular issue, which the hon. Lady so eloquently outlined in her opening speech.

It was with some bemusement that I read the Public Health England analysis, because it was, frankly, incomplete. It did not include a breakdown of individual occupations, it did not look at comorbidities, and it treated people from the BAME community as if they were one homogeneous group, which I think we have just agreed does not exist. This was incredibly concerning, and I hope that the Under-Secretary of State for Health and Social Care, my hon. Friend Jo Churchill, will be able to address this directly when she speaks at the conclusion of the debate.

I took some time, after reading that Public Health England report, to go back through one of the reports done by the Women and Equalities Committee in September 2018, on the race disparity audit. It was a good report that was well received by the Government, and it called for distinct changes in the way in which Government organisations collected data, precisely so that we did not end up with a homogeneous approach to these issues. In particular, I would be grateful if the Minister could update the House on the work that has been done around the conclusions of that Women and Equalities Committee report, because it is unacceptable in 2020 Britain that Public Health England would not include an analysis of those particular factors in its analysis of this health pandemic.

I know that PHE is reliant on the Office for National Statistics and other organisations for the data that it is given, but that is exactly the issue that we focused on in the Women and Equalities Committee report. We identified the need for the standardisation of data and the need to ensure that we did not have a homogeneous approach, particularly when we talked about the analysis of data relating to different ethnic minority groups. Perhaps my hon. Friend the Minister could also update the House on the quality improvement plan that was going to be put in place, where the race disparity audit was going to work with the ONS centre for expertise on inequality. A key recommendation was that the Government should have an action plan to improve data collection to ensure that disaggregation was far easier and that more data was collected. The Select Committee also called for the inter-ministerial group on race disparity to work more closely with the ONS on these issues, and perhaps the Minister could update the House on the work of that particular sub-Committee.

It is a tragedy that we are having this debate today, but it is an important debate not just for covid-19 but for the way in which we understand these problems more generally."