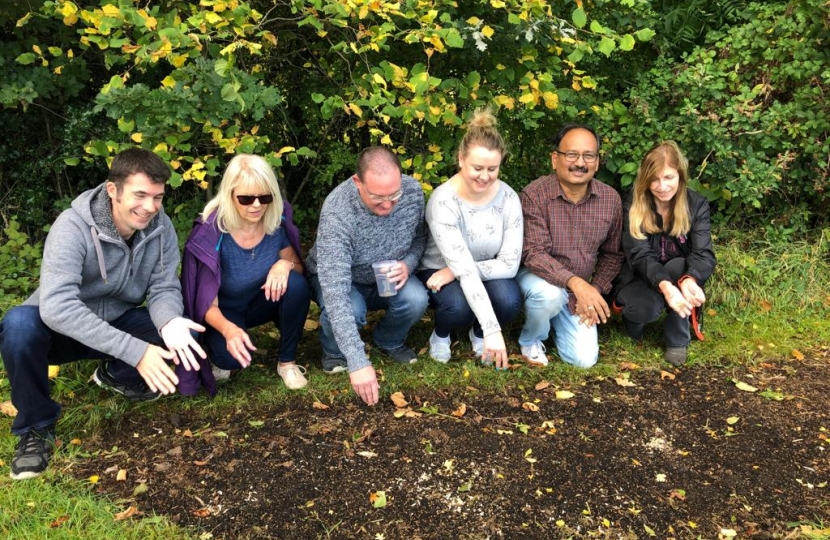 Basingstoke MP Maria Miller joined the Chairman and other Committee Members of Chineham Village Hall, as well as local Borough CouncillorLaura Edwards, to plant a “pollinator patch” in the grounds of the Village Hall, as part of the “Wilder Chineham and Sherfield Park” initiative.

“Pollinator patches” are being planted in a number of locations across Chineham and Sherfield Park, to encourage bees and other pollinating insects, following a community meeting earlier in the year, which Maria held with the Hampshire and Isle of Wight Wildlife Trust and Cllr Elaine Still.

In addition to the “pollinator patches”, there are other ways in which the “Wilder Chineham and Sherfield Park” initiative is being taken forward. For example, at Chineham Business Park, the Management team have been putting in place a biodiversity plan, which includes leaving an area of land to grow wild,  where two rare species of orchid have been identified, and sowing wildflower seeds in several areas around Chineham Park.

Maria commented: “It is great to see more “pollinator patches” being planted in Chineham and Sherfield Park, and I will look forward to seeing how they grow and develop.”

“I am also really interested to see what the Chineham Park management team is doing to increase the biodiversity of the Park, and understand that once the wildflower areas are established, local schools will be invited to visit for field trips.”