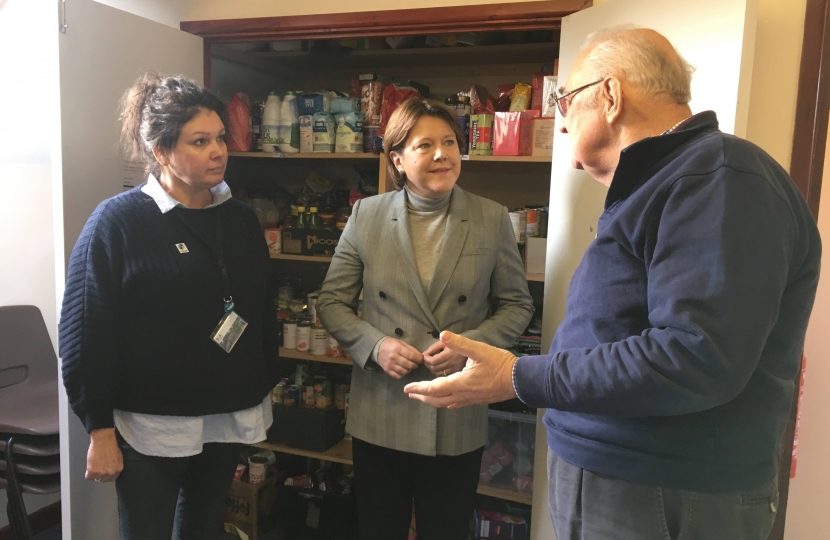 Basingstoke MP Maria Miller recently called in at the Camrose Centre, which provides drop-in support and advice for homeless and vulnerably housed people in Basingstoke. It is located in Glebe Hall, behind St Michael’s Church in the town centre.

Maria met the Centre’s Manager, Clare Farrow and Managing Trustee Mike Browning for an update on recent developments, including the new showering facilities at the Centre. They also told her about their hopes for a move to larger premises which could be a “hub” where their service users would be able to access a range of support and services alongside the support offered by the Camrose Centre. Maria also had a tour of the building, being shown the storage facilities for food, clothing, bedding, toiletries, and other items, for which the Centre is very much dependent on donations. Maria met volunteers who help to run the service, including two volunteers who cook a hot meal for everyone who attends.

Maria said: “The Camrose Centre continues to provide an important service for people in Basingstoke who are homeless, at risk of becoming homeless, or are otherwise vulnerably housed – and helps many of them to get back onto their feet. I talked to some of the people who had dropped in for a hot meal and other support, and it was clear that they see this as a vital source of help and information.”

“I would also pay tribute to the wonderful staff and volunteers who keep the service running, and to the many individuals, businesses, charities and churches in the town who generously donate food and other items to the Centre, without which it would not be possible to provide the service that is clearly so highly valued.”