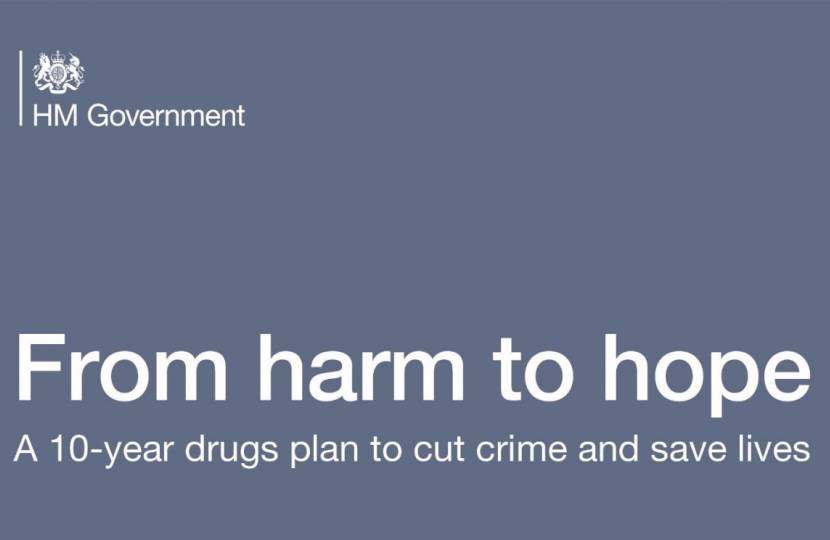 Local MP Maria Miller welcomes the Government’s announcement of a new 10-year drug strategy to cut crime and save lives by reducing the supply and demand for drugs and delivering a high-quality treatment and recovery system. The strategy will keep our streets safe by strengthening police programmes that crack down on drug gangs, giving law enforcement new powers to expand drug testing, and using innovative new methods to discourage drug taking.

“It’s important to have a tough approach against organised crime which is behind so much of drug dealing in the South East, coupled with effective treatment and rehab interventions for those struggling with addiction. This is why I hugely welcome the Government’s new strategy, which plans to do just that.”

“Drug taking is a crime and far from a “victimless crime”. Police intelligence shows that gangs are using children and vulnerable adults to transport drugs using the local railway network with Basingstoke Station used as a gateway for transporting drugs into Hampshire, and anyone in Hampshire buying or using drugs like cannabis and cocaine is supporting criminal organisations that exploit children as young as 13 to carry drugs into our county.”

The Home Office reports that in England alone, there are 300,000 heroin and crack addicts who are responsible for nearly half of acquisitive crime, including burglary and robbery, while drugs drive nearly half of all homicides, at a total cost to society of nearly £20 billion a year.

The 10-year strategy for England and Wales includes a commitment to dismantling more than 2,000 county lines and making thousands more arrests.

The strategy comes after it was reported in August 2021 that ONS data showed an 80% increase in the number of people are dying after using cocaine and opiates since 2012.It builds on significant progress already made by Government, including falling crime rates, an extra 11,053 police officers on our streets and over 1,500 drugs lines closed since 2019