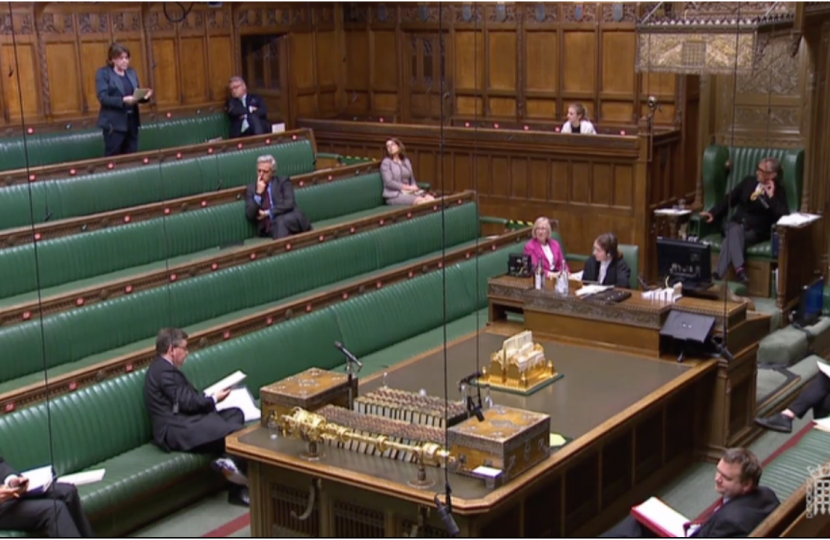 The draft version of the Bill was published on 21 January 2019 as part of the Government’s response to its ‘Transforming the response to domestic abuse’ consultation, which ran from March to May 2018. The draft Bill was scrutinised by the Joint Committee on the Draft Domestic Abuse Bill, chaired by Maria Miller. The Committee reported to the House of Commons on 11 June 2019, making a number of recommendations to give greater protection to victims of domestic abuse.

The Bill was introduced in the House of Commons on 3 March 2020 and received its Second Reading on Tuesday 28 April.

Speaking in the debate Maria welcomed Government’s positive response to the Joint Committee’s recommendations and pressed the government on outstanding issues of extension of special measures to family courts and migrant women. Maria also raised the very real concerns from local charities about the potential for funding issues in relation to a spike in cases when the lockdown is lifted.

Maria said; “I thank again the Members of both Houses who were members of the Draft Bill Joint Committee, which I chaired a year ago. General elections, Brexit and pandemics may have got in the way of the legislation, but we have a chance to put that right today.
In our extensive scrutiny of the Bill, we held seven evidence sessions and the Government have responded positively to many of the recommendations that we made. I welcome the Government’s decision to include the duty on local authorities in England to provide support for victims and their children in refuges and other safe accommodation, and to provide funding to do that.

Other recommendations from the Committee that have been taken forward by the Government include the issue of the interpretation of the definition of domestic abuse. We had a long and hard debate on this, and we are particularly pleased to see that the statutory definition will be coupled with guidance, particularly on how to deal with the effects that domestic abuse has on children.

There is also the fact that, overwhelmingly, this is a crime where the victims are women, and that is an important thing the Government have acknowledged. The Government have also agreed, as a result of the evidence they heard from the Committee, that there will be a mandatory ban on cross-examination of domestic abuse victims by their perpetrators in the family courts, as well as in the criminal courts.

However, there are two outstanding issues on which I would like to press the Government. The first is making sure that we have the report from the panel considering the extension of special measures to family courts as soon as possible, and that there is no further delay on that being put in place, particularly given the current circumstances.

The Committee recommended that a firewall be established separating the reporting of crime and access to support services from immigration control. I was alarmed to see that a recently published FOI request showed that 27 out of 45 police forces routinely share details with the Home Office if victims have insecure immigration status.

We meet to debate the Bill in unprecedented times, and I know from speaking to my own local domestic abuse charity in Hampshire, Stop Domestic Abuse, that there are real concerns about the potential for funding issues in relation to a spike in cases when the lockdown is lifted. I would like to take this opportunity to applaud all the work that it is doing to support my constituents. Many domestic abuse organisations are concerned about this issue, and I would like to add my voice to the support for at least part of the very generous £750 million announced by the Chancellor to be earmarked for specialist services.

The impact of this pandemic on our lives is profound, but for those living with domestic abuse it is not only the virus that is life threatening, and we need to take this opportunity today to act”.