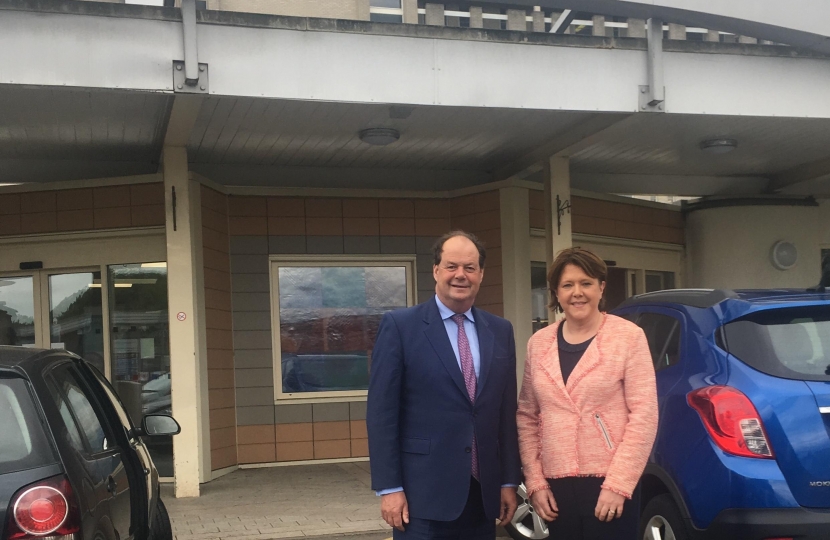 Basingstoke MP Maria Miller was pleased to welcome Health Minister Stephen Hammond MP to Basingstoke when he visited the Basingstoke and North Hampshire Hospital recently. The Minister was welcomed to the Hospital by Chief Executive Alex Whitfield and Chairman of the Hospital Trust Steve Erskine.

The Health Minister had a meeting with senior management of the Hospital, as well as Maria, Clive Sanders, Leader of Basingstoke and Deane Borough Council, and Richard Samuel, chief officer for the Hampshire and Isle of Wight Sustainability and Transformation Plan. He heard about the background to the hospital, challenges associated with a growing population, and future plans. He was then given a tour of a number of departments, including the Emergency Department, a Medical Ward specialising in respiratory conditions, the cardiac catheterisation laboratory, and the neonatal unit.

During his visit, Mr Hammond met a range of medical staff, who briefed him on their departments and outlined the current challenges.

Maria said: “I am delighted that the Health Minister was able to visit Basingstoke and see at first hand the amazing work being done by our doctors, nurses and medical teams, sometimes in quite challenging conditions. I was particularly pleased that he was able to see the Accident and Emergency Department, where £4 million of extra funding last September enabled the Hospital to carry out improvement works to increase capacity ahead of the winter pressures.”

“I also took the opportunity to underline to the Minister that I want to see new plans for a new hospital to serve the growing community across North Hampshire.”