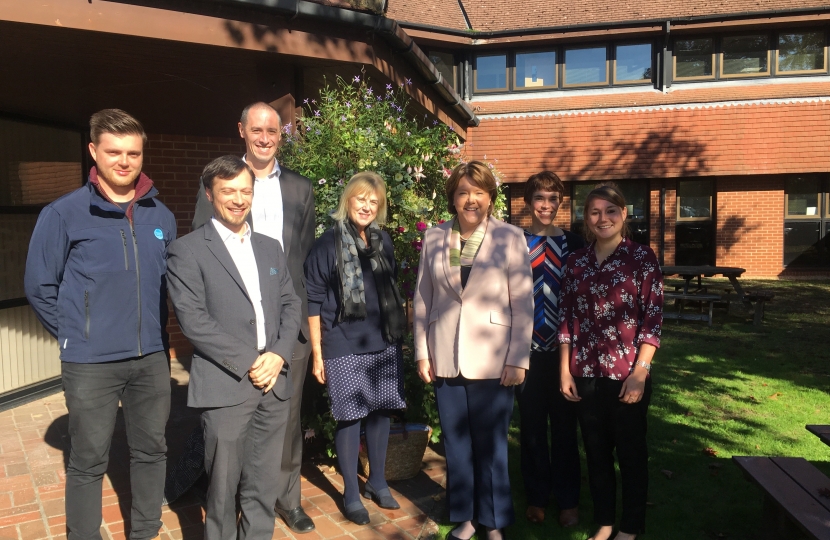 Basingstoke MP Maria Miller met up recently with representatives of the Environment Agency and Thames Water, for a discussion of the ongoing work by both organisations to improve the water quality and ecology of the River Loddon around the Sewage Treatment Works at Chineham.

Maria was told that there had been a step-change in the phosphate concentration in the River Loddon downstream of the sewage works, with a significant drop in the amount of phosphate in the river. The status of the river for phosphates, as reported under the EU Water Framework Directive, was now on the boundary between Moderate and Good. Given that the sewage works discharges into the upper reaches of the river, the improvements also have a much wider implication for the water quality and ecology of the whole Loddon catchment.

The improvement is the combined result of Thames Water’s work to enhance the performance of the Basingstoke Sewage Treatment Works, including the trialling – and now full integration - of ground-breaking new engineering at the plant,  and the work of the  Loddon Catchment Partnership.

Maria said: “The health of the River Loddon has been a huge concern to me for many years, and I have long campaigned for measures to improve the water quality, particularly around the time the Local Plan was being developed. So it is great to hear about this fantastic improvement in water quality. It is particularly pleasing that the phosphate reduction trial carried out by Thames Water at the Basingstoke plant has made such an impact; this trial was originally due to be carried out elsewhere, but I lobbied Thames Water for it to come to Basingstoke. This means we have been able to reap the benefits of the new technology sooner than might otherwise have been the case.”

“The Environment Agency, the Catchment Partnership and Thames Water are all to be congratulated on their achievements, and on their commitment to making even more improvement to the river.”

“Given the high level of housebuilding we have in Basingstoke, and ambitious plans for future growth, I was particularly pleased to hear their confidence in being able to cope with increased capacity at the sewage works without any deterioration in the water quality of the river.”