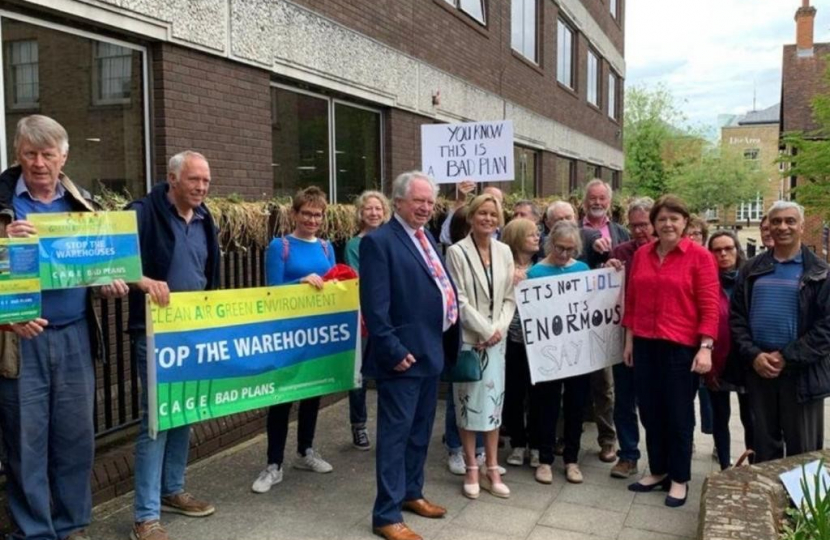 Basingstoke MP, Maria Miller, welcomed the decision of the Borough Council’s Development Control Committee to refuse the distribution depot planning application located at Oakdown Farm, near Junction 7 of the M3.  Maria addressed the Committee directly alongside other local opponents of the application.

Following the decision, Maria said: “I am glad that the Committee has come to the right decision for the people of Basingstoke, and put the health needs of our community ahead of speculative development.

“This application had the potentially to critically undermine the delivery of a new hospital for Basingstoke, the preferred site for which is right next to this location.  Elected representatives must act for the best interests of their community, and I firmly believe this application would not have been to Basingstoke’s benefit.

“I also want to pay tribute to the tireless campaigning efforts of local residents on this issue, in particular the Clean Air Green Environment (CAGE) group.  Many of them have turned out this evening, alongside both Borough and County Councillors, to protest the application ahead of the Committee, no doubt emphasising to Committee Members the depth of opposition to this application.”

The text of Maria’s full speech to the Committee can be viewed below:

“This planning application could jeopardise the most preferred site for the new Hospital that the NHS wants to build for our community on land adjacent to Oakdown Farm. ‘Could’ because the truth is no one has a full picture of what should happen at J7. This sort of development, in this place, has never been part of the Local Plan.

The new Hospital site has been chosen because the Ambulance Service have said it would save more lives, because the roads could would be used for the very sickest patients, requiring blue light services and life saving healthcare the quickest.  Anything that changes the capacity of the road network could change the viability of the site, potentially jeopardising the preferred site for our new Hospital, which is currently waiting to go out to large scale public consultation after years of planning.

The proposed 3 new giant warehouse distribution centres would fundamentally change the pressures on local roads networks with large numbers of additional lorries, vans and cars travelling on the roads night and day to distribute goods around the region. The scale of this application may have reduced a little. But it still adds significant numbers of vehicles to the roads.

Following the pandemic nothing is more important than the health of our community, and the new Hospital is an important part of the NHS’s work to expand healthcare in our area. The current Hospital was built in 1970s to last for 30 years.  Our current Hospital is badly in need of replacement with £700m repairs projected over the next 30 years, the cost of building an entire new Hospital.  NHS processes take time, and a Hospital is a big investment. Plans for the Hospital at this site predate the commercial application. Perhaps the property developers involved saw an opportunity. That’s their prerogative. But our focus, as elected representatives, is on what is best for our community. Approving this application today could potentially jeopardise the most preferred site for new Hospital because those plans would be part of the Local Plan process and are not yet before the committee.

There is however a straightforward way to proceed. This application is well outside of the agreed Settlement Policy Boundary. There was never any intention in the current Local Plan for any development there. The Council is now updating our Local Plan; so rather than rush to approve today press pause, to consider it more properly as part of the new Local Plan process, when all competing demands can be fairly and equally taken in to account.

Residents also want to know all is being done to keep them safe on the roads. This application could worsen motorway safety. Members know the Highways Agency are concerned about motorway safety at J7 of the M3. Traffic must weave between lanes because J7 and J8 are too close together for today’s level of traffic. Because there are no plans to build a warehouse distribution centre at J7 of the M3, there are no plans and no money in Department for Transport budgets to mitigate this. The problem of J7 and 8 is now being investigated by Highways England but they have no findings yet to help make your decision today.

Finally, there is the cumulative impact assessment of building 3 new warehouse distribution centres, a new regional Hospital, traffic from the 1750 new homes already being built on the same stretch of the A30 and new house building at Southern Manydown. Hampshire County Council and Basingstoke are working on this, but the results are not complete because it was always due to be part of the next Local Plan.

We cannot allow the speculative applications from property developers to drive the Council towards a ‘field by field’ approach when it comes to planning our town. They should be looked at together in the Local Plan process. it is impossible in good faith to consider this application outside of that process.

As the Committee knows, I and other Hampshire MPs are so concerned we have written to the Secretary of State to ask for this application to be ‘called-in’. Call-in powers in Section 77 of the Town and Country Planning Act 1990 are used by the Govt sparingly with just 15 in the last year, because local elected people are the best placed to make the right judgement for their communities. This planning application for Oakdown Farm falls squarely within the ‘Caborn Principles’ used to judge when the call-in process should be used: it is an application that may conflict with national policies on important matters (the conflict with the National Hospital Programme); and has significant effect beyond its’ immediate locality (the impact on critical health services in North and Mid Hampshire).

The Call-in process is not MPs taking the decision; the process is a Public Inquiry chaired by a Planning Inspector questioning the validity of the decision making of this Council. It is not an outcome I would welcome because it undermines locally elected people who are best placed to make decisions for their community.

Indeed the gravity of the implications of the call-in process for local government accountability means the Secretary of State rarely sanctions its use; just a dozen a year nationwide. Members, you cannot rely on the Government to deliver the outcome you want to see. If you want to see this plan for commercial distribution warehouses halted then you need to vote to halt it today.

Each councillor needs to vote for what is best for the people you represent. I believe that is to put the preferred site of the Hospital and the health needs of our community first.

The only way members can get the right outcome is to press pause; not to agree this application today, but to look at it in the round as part of the Local Plan.”