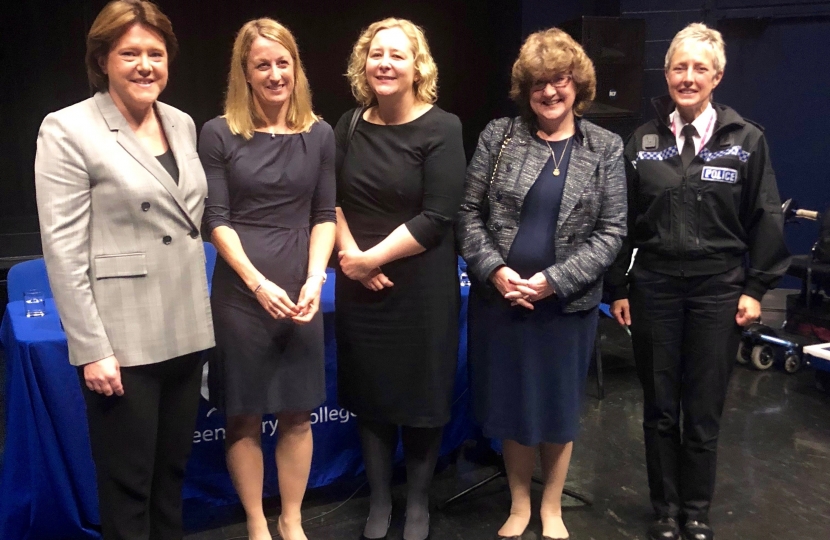 The event was hosted by Queen Mary College Basingstoke and attendees included a range of professionals from Basingstoke businesses, colleges and charities.

Dr Liz Jackson is an inspirational figure with an extraordinary story, as many would have discovered when she was featured in Channel 4’s ‘Secret Millionaire’. Honoured by Her Majesty the Queen, Liz was awarded an MBE in 2007 for services to business, and in 2012 she was bestowed with an honorary doctorate by Staffordshire University for her business achievements and for inspiring others. Liz ran her own award-winning company, Great Guns Marketing, for 17 years – a business which she launched the year she lost her eyesight. Liz is now the Marketing Director of local M&A company, BCMS.

Liz talked about the key ingredients for happiness and success in the business world and beyond. She emphasized the importance or encouraging colleagues to reach their full potential and developing strong leadership skills and resilience.

Maria Miller MP then Chaired a Q and A session with Liz Jackson and a panel of three; Mitch Lloyd who runs the Basingstoke Jeweler Petra, Superintendent Kelly Whiting from Hampshire Police and Evelyn Vincent from the charity Headway. Questions covered a wide range of topics including the importance of mentoring younger generations, flexible working, Maternity Leave, and both the challenges and opportunities faced by working women.

Maria commented; “I was delighted to welcomed Liz Jackson to our Inspiring Women Series. The audience were very interested to hear of her experiences and the challenges she both faced and overcame. The most striking comment she made was that it is vital to recognise potential and recognise that your work colleagues are 'TOPCATS'-Totally Outstanding People Capable of Awesome Things."

The panel also gave their insight from different perspectives and this really helped show how women can encourage others by sharing their own experiences. The Panel were questioned about a wide range of things including the benefits of a gender balanced workplace and inclusive practices. The challenges of getting more women to return to the workplace was also a key item on the agenda, given that Basingstoke has a pool of untapped labour and employers are actively seeking to expand their workforces. “

“Liz’s honesty and positivity had a powerful impact on all those attending and we all left with much food for thought. I am looking forward to welcoming other guest speakers and am certain that the Inspiring Women Series will encourage women to apply for roles in areas which they have not previously considered.”