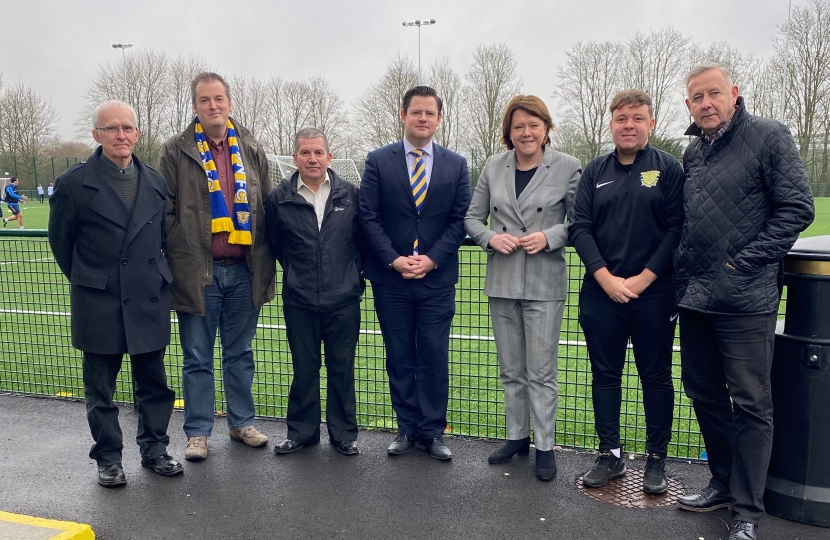 Maria Miller MP has asked Hampshire County Council and Basingstoke Borough Council to confirm that mitigation for the loss of the Camrose ground has been secured before any redevelopment of the grounds start. Speaking following the announcement that Hampshire County Council Cabinet Member, Cllr Rob Humby will consider the overall project to build a new road through the Camrose site on Thursday 2 July, Maria has made it clear that the formal planning objection made by Sport England needs to be resolved in full before this important road project moves forward for planning consent following this week’s initial meeting.

Maria said, “Sport England has been clear from the start of this lengthy process that the owners of the Camrose ground have to make up for its loss before any redevelopment of the grounds can start. They have specifically said that Basingstoke FC has to have been relocated to an alternative home at the Winklebury FC grounds. It was regrettable that the owners of the Camrose grounds decided to stop football being played there well before a new home for the team could be found. Now the owners of the ground need to do the right thing and put in place a legal undertaking to pay for the team to move to a new and suitably fitted out location, at the FA site in Winklebury.”

Councillor Rob Humby, Deputy Leader and Executive Member for Economy, Transport and Environment at Hampshire County Council said; “We continue to work with Basingstoke and Deane Borough Council through the planning system to ensure that extra sports facilities are part of the planning agreement.  We have no intention of progressing construction, other than some initial clearance, until planning permission is granted that would protect Sport England’s interests and ensure the sports facilities that the community want, will be built.”

Tim Hollingsworth, Chief Executive of Sport England said in a letter to local MP Maria Miller, “Until this agreement and the club’s needs are satisfied Sport England will continue to maintain our objection to planning proposals on the Camrose site and seek to secure mitigation for the loss of playing fields at Camrose Stadium.”