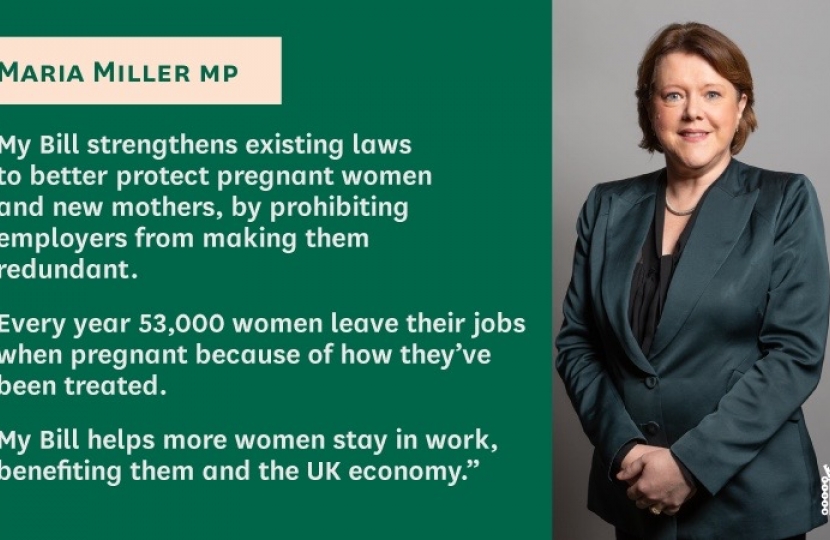 I beg to move,

That leave be given to bring in a Bill to prohibit redundancy during pregnancy and maternity leave and for six months after the end of the pregnancy or leave, except in specified circumstances; and for connected purposes.

Mr Speaker we have record numbers of women in work. More women studying STEM subjects to the highest levels. More women being given the opportunity to take up roles in every sector of society. Women will have a central role in this country’s recovery from Covid19.

And yet, despite the real legal protections, set in law by this place, designed to outlaw discrimination against pregnant women and new mums, the Government’s own data shows more than 50,000 women a year feel they have no choice but to leave their jobs when they are pregnant. The routine use of Non-Disclosure Agreements mean the reasons women leave their jobs can be opaque even when analysed through third party research but we do know that around 1 in 20 are made redundant.

Now, anyone who has ever been a parent will know pregnancy and the period after the birth is a time when, for most of us, money is a huge concern, securing a new job can be impossible because of the obvious need to take maternity leave, starting a new job when meeting the needs of a new baby should be of paramount concern, is in practice extremely challenging.

Taking the decision to leave a job, at that point, is not a decision most women would plan for, voluntarily, based on their own choice.

The data shows women forced out of their jobs during this period of their working life most often have to downgrade their jobs and their income, often to low paid part time work, well below their skill levels. Not Mr Speaker through any notion of choice which is an argument of old, thankfully losing credibility in most people’s minds but through sheer financial necessity, with all of the ensuing productivity issues for the nation as a whole. As a result we see a far greater gender pay gap for women in their 40s of 25%, with a resulting pension penalty on top of that meaning poverty in old age is a reality for many women.

It is wrong that given our legislation so many women should be fearful of losing their jobs simply because they are pregnant. That is why I am introducing this Bill today to put in place an effective new law to protect pregnant women and new mothers from this fate, helping to keep them in the Labour market, which is good for them, their families and the economy.

Challenges facing pregnant women and new mums have been even more acute in recent months and any economic shock that follows Covid19 could well be the first that impacts women more than men.

Reports show that women seeking legal advice regarding discrimination has increased fivefold since the lockdown. A study by PWC in May has found 78% of those who have already lost their jobs as a result of Covid19 are women. And a report from the London School of Economics found more women are likely to lose their jobs in the coming months because of the sectors most likely to be hit.

The past few months have cast a worrying spotlight on the attitudes some UK employers have towards pregnant women and new mums and their willingness to contravene existing redundancy laws by allowing pregnant women and new mothers to be the first in line for dismissal. Some women have been told to go home on sick pay when they are not allowed to work because they are pregnant, rather than full pay as set out in law.

I make no excuse for the fact that this Bill is also designed to sharpen employers focus on their understanding of the law, and their treatment of women in their workforce.

The current costs to the taxpayer are significant, as the Government forgo taxes and pay increased benefits to the tune of between £14 million and £17 million. A report by McKinsey also found that encouraging women’s participation in work and ensuring that they are protected from discrimination could add £150 billion to the UK economy.

If the Government are to reboot the economy, use all of the talent this country has to its fullest and address ongoing issues around productivity then it must tackle maternity discrimination at its roots.

I don’t for one minute pretend this is easy. And it is likely the reported levels of discrimination are the tip of the iceberg.

Many Honourable and Right Honourable Members will have seen cases from women in their own constituencies in recent weeks similar to the young woman I spoke to who had been made redundant. Her ordeal began when her employers asked her how many weeks pregnant she was. She was furloughed in March for two days, and then, just 3 hours before she was entitled to Statutory Maternity Pay, she was made redundant. It was’ she said, ‘a devastating process that felt engineered to get rid of people like me’. Story that will sound familiar to many.

I initially presented this Bill in 2019 on the heels of the Department for Business, Energy and Industrial Strategy’s consultation, which looked at extending the existing protections to six months after maternity leave has ended. The current protections mean that if a woman is made redundant during her maternity leave, she must be offered any suitable alternative vacancies where one is available if her job is at risk of redundancy. She should in theory be given priority. But both the EHRC and Maternity Action advice helplines show in practice this is woefully inadequate. Employers continually confuse their legal obligations, ignore them, or insist women on maternity leave compete for an alternative post at a time when they are giving birth or have been out of the workplace for some weeks or months.

So extending the current provisions for six months would simply entrench a system that is simply not working in practice.

This Bill proposes a much simpler and clearer protection, drawing on the proposals of the Women and Equalities Committee in 2016. The provisions I propose are not untrialled or experimental but based on much of the model already used in Germany.

The major change it would make is to offer pregnant women the sort of protection that is long overdue. Currently, for a woman to challenge her employer’s unlawful behaviour, she would have to go to an employment tribunal—not an attractive prospect for any employee, but particularly one who is looking after the needs of a newborn baby at home.

Employers are well aware employment tribunal claims are not an attractive choice and that less than 1% of women subject to maternity or pregnancy discrimination seek remedy at Tribunal.

My Bill would strip out the complexity of the protection available to these women. We would be able to tell a woman that from the time she is pregnant to six months after she returns to work, she cannot be made redundant, unless the employer is closing down all of the business or ceasing the work that she is employed to do. Women who experience a stillbirth or miscarriage would similarly be protected for up to six months from the end of their pregnancy or any leave that they were entitled to. The woman’s employer would also be able to easily comprehend their duty, making it easier to comply and harder to inadvertently discriminate.

There are half a million pregnant women in the workplace every year and the Government should be applauded for achieving record numbers of women in work. But now we need to update our laws to reflect the challenges they routinely face.

The change that I propose has the support of Members across the House and organisations such as Pregnant Then Screwed, Maternity Action, EHRC and the Fawcett Society, which have been invaluable in helping to draft the Bill. Indeed when I presented this Bill last year for the first time it was with the support of many Honourable and Right Honourable Members who now grace the treasury bench.

Rather than simply extending the existing protections, which we know do not go far enough, we need robust legislation that takes the onus off women. That is precisely what this Bill will do.

I commend the Bill to the House.

Basingstoke's MP, Maria Miller has welcomed the opening of a Local Test Site at The Anvil, making it easier for many people in the constituency to access testing.