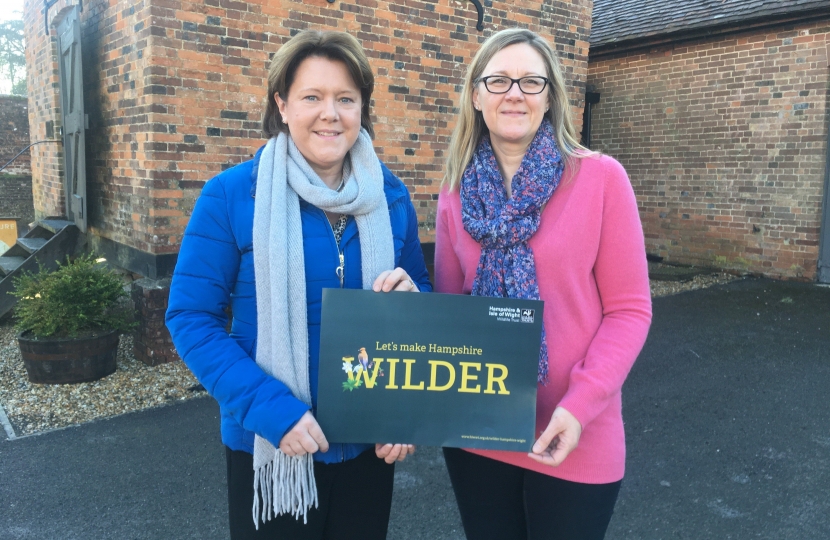 Local MP Maria Miller recently joined forces with the Hampshire and Isle of Wight Wildlife Trust and Hampshire County Council Chairman Cllr Elaine Still, to host a meeting aimed at exploring what a “Wilder Chineham and Sherfield Park” might look like.

This idea stems from the Wildlife Trust’s “Wilder Hampshire” initiative, which looks at the decline in wildlife and nature, and suggests a plan for a “nature recovery” across Hampshire, with a focus on the positive difference that individuals and communities can make, and the idea of creating “wilder neighbourhoods”. Working with the Wildlife Trust, Maria was keen to gauge interest in creating a “Wilder Basingstoke”, starting in Chineham and Sherfield Park.

The meeting at Chineham Village Hall was packed, with representatives from a wide range of bodies and organisations, including Chineham Conservation Group, the Chineham Scouts and Girl Guides, students from the Costello School, both Parish Councils and the Hampshire and Isle of Wight Amphibian and Reptile Group, as well as local residents interested in nature and wildlife.

Maria said: “Everyone who came along to the meeting was really engaged and full of ideas of how to improve the wildlife and nature in the local area. It was great to have such a wide range of organisations and individuals involved, and particularly so many young people who are passionate about nature and the environment.”

“While it is clear that much is already going on, I will be working with the Wildlife Trust and local councillors to see how we can translate some of these ideas into further actions. These might include encouraging people to plant more bee-friendly wild flowers through the “Pollinator Promise” and working with housing developers to have better planting in gardens and common areas.”

For more information about the Hampshire and Isle of Wight Wildlife Trust’s “Wilder” campaign, see their website www.hiwwt.org.uk