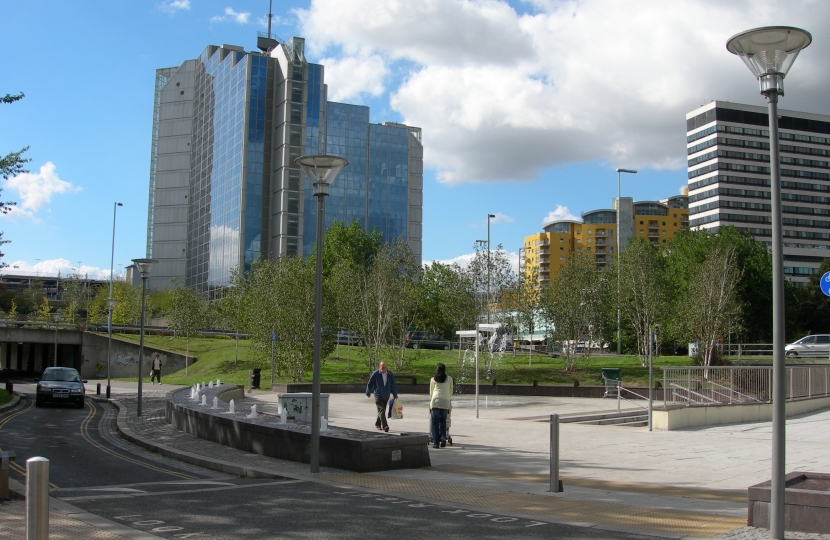 On 31 October 1961, Basingstoke Borough Council signed an agreement with the then London County Council, which would offer homes and employment to 11,500 families from London. This began the transformation of Basingstoke which carries on today. The town is a good place to live, with an excellent hospital, good shopping and in the Anvil, a world-class concert hall.

But Basingstoke was not a new town; it is mentioned in the Domesday Book of 1086 at which time the parish church of St Michael already existed and the town had a market and 3 mills. In 1214 market day was fixed by royal charter to take place on a Wednesday and has been so ever since.

Many people know the ruined chapel just north of the railway line. This was the town’s graveyard for 700 years from the 13th century until the early 20th. The ruins of 2 chapels are here – one dedicated to the Holy Ghost from the 13th century and the other dedicated to the Holy Trinity from about 1525, which was built by William Sandys of the Vyne as a burial place for him and his family. For a description of the chapels and a trail around the cemetery, visit the Basingstoke Heritage Society website www.bas-herit-soc.org

During the English Civil War (1641-1651), Basing House was besieged for several years until, in 1645, Oliver Cromwell himself turned up to finalize the matter. He stayed in the Falcon Inn in London Street, roughly where The Light Lounge is today.

A story associated with the old cemetery is that of Mrs Blunden, who was buried alive there in 1674. This shocking story was the subject of a leaflet published in London, which claimed that the town had been fined ‘a great fine’ but there is no evidence that this was true.

Basingstoke is a town where many roads meet and it became an important town for the coaching trade with its heyday in the late 18thand early 19th centuries.  Inns such as the George (now Zizzi’s) and the Red Lion were all places where travellers and carriers changed horses at all hours of the day and night.  South of the town, Fairfields provided much grazing and fodder   to service this substantial trade.

The Basingstoke Canal opened in 1796 and carried all kinds of goods and even passengers to London. This permitted the development of foundries,     the most famous and lasting of which became the firm of Wallis and Steevens.  The coming of the railway in 1839 allowed other industry to flourish and ended the coaching trade.

Jane Austen 1775-1817, whose father was rector at nearby Steventon, danced at Assemblies held in the town.

Thomas Hardy put Basingstoke literally onto his map of Wessex, inventing the name Stoke Barehills for the town. In Jude the Obscure he writes about the railway, which was a junction for the London and Reading lines, which had different gauges and separate stations.

Other famous townspeople include Thomas Burberry, whose drapery business grew into today’s fashion house. His significant invention was a waterproof fabric, which he called Gabardine.  At the end of WW1, Burberry was able to purchase Goldings with its parkland and to hold it until the town could raise the money to buy it as a permanent memorial to the fallen. Still known as the War Memorial Park, it retains not just the fine house known as Goldings but its 18th century parkland, with ha-ha.

Poet and broadcaster, John Arlott was born in the cemetery lodge on Chapel Hill and educated at Queen Mary’s Grammar School – for older people, he is still ‘the voice of cricket’.

For more information, get a copy of the Town Trail - a self-guided walk around 45 sites of interest from the Market Place to Eastrop Park available from the Library and the Willis Museum.