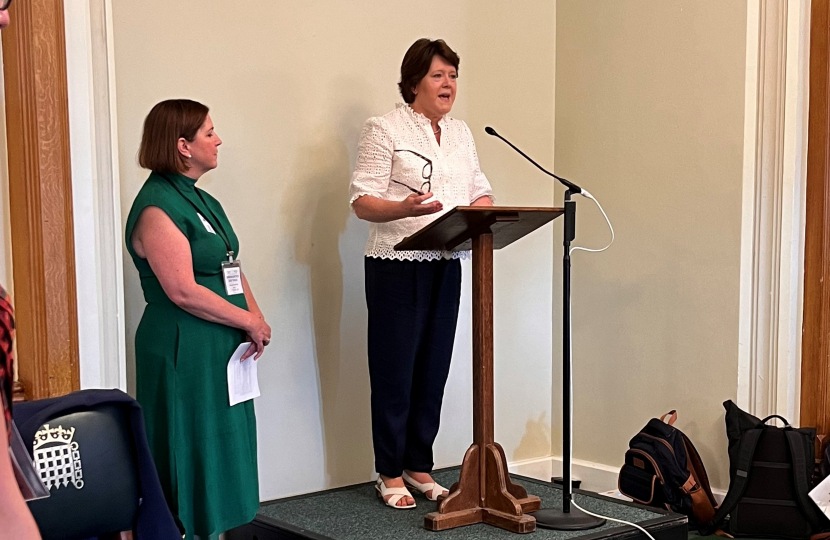 On Tuesday 12th July, Basingstoke MP, Maria Miller, hosted the Domestic Abuse Commissioner for England and Wales, Nicole Jacobs, in Parliament to highlight the huge and increasing need for high-quality domestic abuse support services to be spread evenly across the country.

Maria said, ‘it is excellent that the Government is so clearly committed to tackling the issue of domestic abuse, both through increased funding and the Domestic Abuse Commission. However, there are still issues that need to be addressed, including the plight of migrant women who become victims of domestic abuse. I am looking forward to seeing the outcome of the DAC’s recent pilot scheme, which is due to be published shortly.’

The event organised by Maria was held to spotlight early findings from the Domestic Abuse Commissioner’s (DAC) mapping of domestic abuse services across England and Wales. The findings call to attention the disparity of service provision for those who need it.

Maria addressed those attending by stressing the need to use the early findings, and the more detailed data that will come later, to find and fill gaps in support. It is of vital importance that victims of domestic abuse are able to access support where, and in the ways, they need it, so that it is safe, welcoming, and effective.

Bringing together the Domestic Abuse Commissioner, MPs, officials from across Government departments, and those working to stop domestic abuse is a key way to share ideas and solutions. Maria’s event in Parliament allowed for further discussion so that parliamentarians and officials can advise on priorities for the upcoming Victims Bill, which has been published in draft.