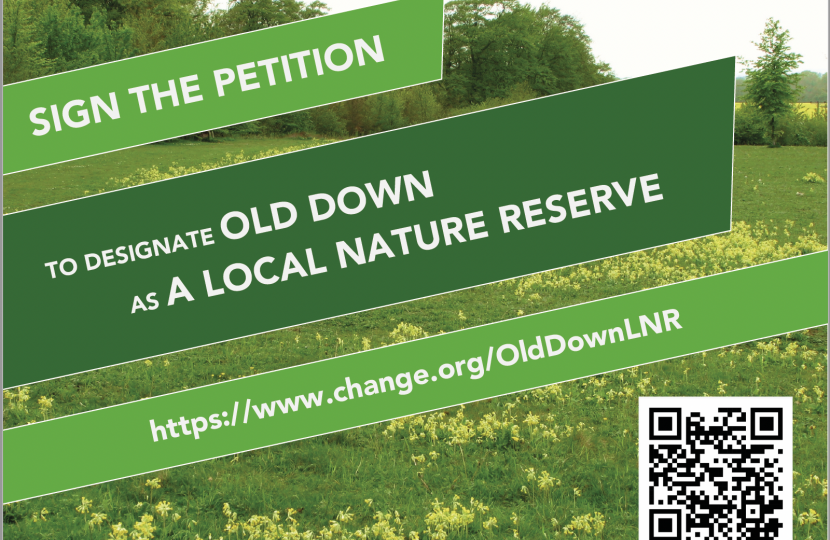 Local MP, Maria Miller, is urging residents to help protect Old Down by calling on Basingstoke Council to designate it as a Local Nature Reserve, the same status as neighbouring Beggarwood Park.

Maria said, “Old Down is integral to the health and quality of life of the local community and supports and enhances natural and ecological wildlife habitats.  Working together with councillors, local groups, and residents I have launched this petition calling on the Borough Council to designate Old Down as Local Nature Reserve and protect this important community green space.

“With only a month to go until the next full Council meeting, we are still some way short of the necessary 4,000 signatures.  It is vital that we push to this number so that the Council must debate the petition.  I would encourage everyone who values green space and nature in Basingstoke to sign and support this important cause.”

The emerging plan for the South West of Basingstoke shows entry points to Manydown through Hounsome Fields development and land closer to M3 Junction 7, removing the need for access through Old Down.

Maria went on to say, “Now is the right time to put in place the proper protections for Old Down which is an area of wild open space valued by so many Basingstoke residents.”

Old Down is integral to the health and quality of life of the local community and supports and enhances natural and ecological wildlife habitats.