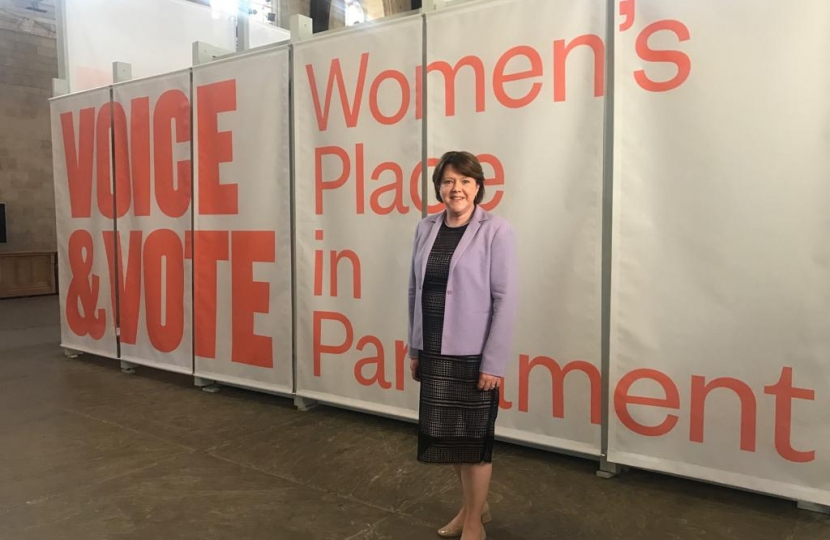 2018 marked one hundred years ago a generation of fearless women changed our country forever by securing, the right for some women to vote. Soon after, laws were passed to allow women to stand for election and in 1919 Nancy Astor became the first woman to take her seat in the House of Commons having been elected as the Conservative Member for Plymouth Sutton.

For too long politics was seen as for men only. Maria believes that having more women in elected office helps to improve politics locally and nationally. Maria is the first woman to be elected to Parliament in North Hampshire, the 265th woman ever to be elected as an MP and the 38th ever to be appointed as a Cabinet Minister. Maria wants to see more women in Westminster to ensure we have a representative Parliament.

Before becoming an MP, Maria had almost 20 years’ experience as a working mother in business. It was this experience that led her to make it a priority, as a Minister for Women and Equality to modernise the workplace to support parents struggling to balance work and family life. Shared parental leave, the right to request flexible working and more female representation at Board level are policies she championed as Minister for Women.

Maria was elected as Chair of the newly established Women and Equalities Select Committee in 2005. The Committee was established as a temporary committee but quickly proved its worth, pursing an ambitious agenda the scope of the work undertaken covered everything from looking at transgender rights for the first time, and having them debated on the Floor of the House of Commons, all the way through to looking at the impact of Brexit on equalities issues,Sexual Harassment in Schools and at Work. The Committee was made permanent in 2017.

Maria believes that it is important to encourage young women, particularly school age girls, to aim high and raise their aspirations. She has spoken to many conferences and groups of girls, including Girl Guides, on this theme, often about her own experiences in business and Parliament, and managing work and family responsibilities. She also works to encourage more girls to study STEM subjects (science, technology, engineering and mathematics) to help increase the number of women working in these areas.