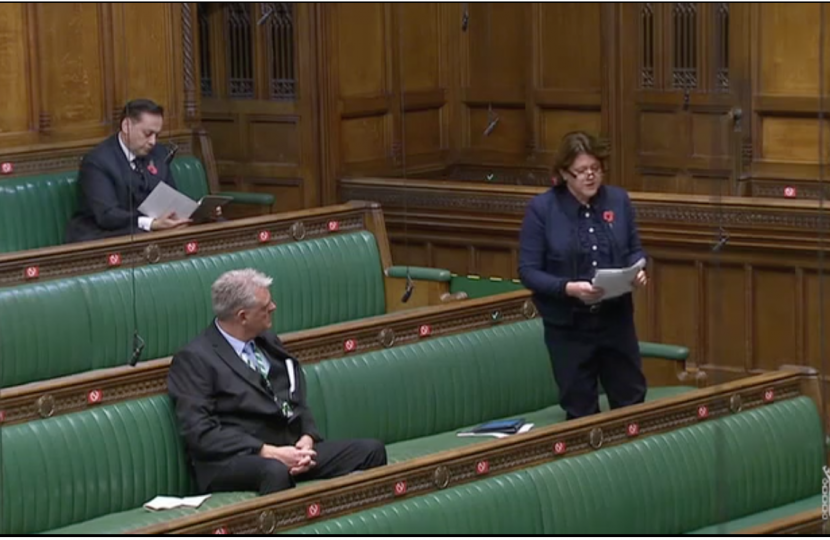 Maria Miller MP spoke in the House of Commons debate on “Remembrance, UK Armed Forces and Society”  on Wednesday 11 November.

Maria said “This Armistice Day, as we have done for 100 years, we remember those who have paid the ultimate sacrifice and given their lives for their country, and this year we remember 100 years since the interment of the unknown soldier in Westminster Abbey, and 100 years since Sir Edwin Lutyens’ monumental Cenotaph was unveiled.

Between 2014 and 2018 we marked the centenary of the first world war in so many extraordinary ways. I had the privilege to chair the first world war centenary committee, which put in place a programme of commemoration marking the start of the conflict at St Symphorien and then an extraordinary series of cultural events such as “Lights Out” and the iconic poppy sculptures. We often struggle as a country to commemorate war, conflict and death, and I would like to pay tribute to 14-18 NOW, the organisation that persuaded politicians that art could help a nation understand and connect emotionally and intellectually with an event that happened 100 years ago, and help, I think for the first time, engage the nation with how the first world war shaped a generation and generations to follow. Perhaps we should do that more often.

The format of remembrance this year may have changed, but the vast debt of gratitude we owe to those who serve and the families who support them does not, and I join those who have paid tribute to the Falkland Islanders and those who fought for their freedom, too. Members of organisations in my constituency, including the Royal British Legion, Basingstoke and Deane Veterans Club and many others, usually come together in an act of solemn worship in remembrance at our town memorial; this year we had to do things differently, but we still had acts of remembrance that were undiminished.

In today’s debate we are not just marking Armistice Day as part of that but are also considering the petition calling for a further strengthening of the armed forces covenant, signed by more than 150 of my constituents. The armed forces covenant was introduced in 2011 and was a real statement of the moral obligation that exists between the nation, the Government and the armed forces. That commitment was further reinforced in the commitments this Government made in last year’s election, including to acknowledge and commemorate the invaluable contribution of diaspora communities in the past and to recognise the contribution in the present day of so many from beyond our shores, such as the Gurkhas.​

Indeed, we should remember the contribution of the Commonwealth members of the armed forces today. More than 4,000 personnel from Commonwealth countries serve in our armed forces, and in my constituency I am proud to have one of the largest veteran Gurkha communities in the country. Many Nepali veterans, and, indeed, other Commonwealth veterans, want, after they have served, to continue to live here, but too often the cost of that can be daunting and at odds with the commitment and loyalty they have shown to our country. I hope the Minister will look carefully at the Royal British Legion campaign on behalf of those people, so that as a nation we can respect those who have chosen to serve our country in this way.

Caring for the health of our armed forces and veterans is a matter this Government take very seriously, and the armed forces covenant annual report sets out the real progress made, particularly supporting veterans with mental health problems, with more than 17,000 veterans receiving specialist support and complex treatment. I know that the Minister is aware that serving personnel can use the facility in my constituency at Parklands hospital in Basingstoke, home to an MOD unit providing mental health services for serving personnel. I met medical staff there and people who were receiving treatment from across the south-east of England. I also had the privilege to be invited to the opening of a new therapeutic garden there, which I hope I can invite the Minister to visit when conditions allow, because facilities like that can make a real difference to people’s lives— hearing from medical professionals, such as Dr Karl Marlowe, and patients, the value of that facility is absolutely clear.

As well as remembering those who have fallen, we must remember those whom we continue to support. It is clear that this Government’s commitment to the armed forces covenant is undiminished, but it is also clear that there is much more to do."