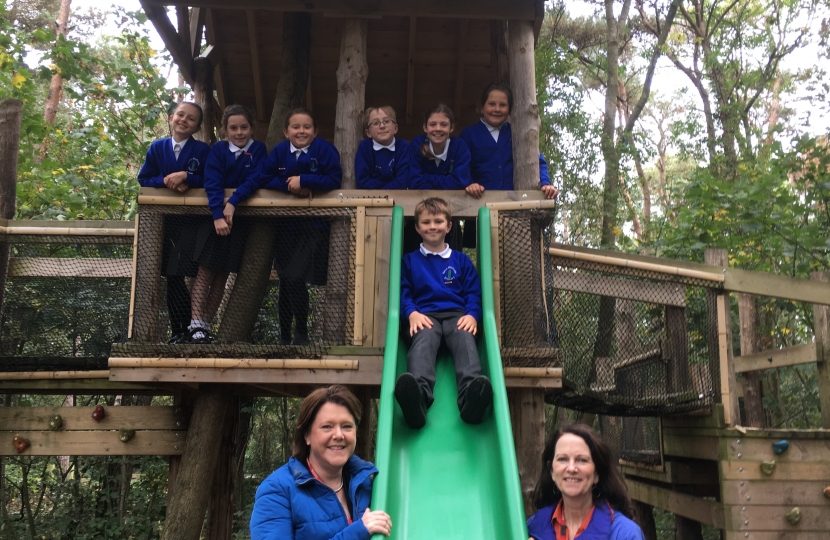 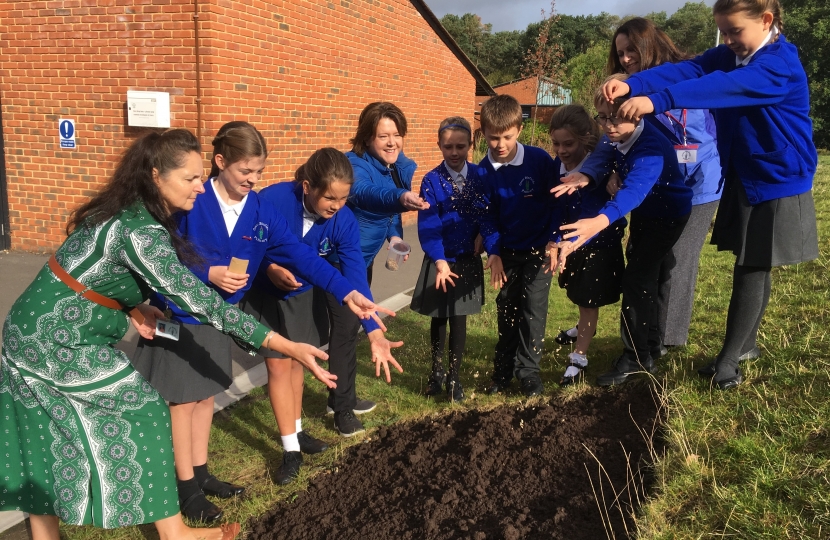 Local MP Maria Miller was delighted to join with pupils from Great Binfields Primary School, to plant the first “Pollinator Patch” as part of the “Wilder Chineham and Sherfield Park” initiative.

Newly elected members of the School Council were also joined by Deputy Headteacher Ms Lyddon and Cllr Elaine Still, in scattering the wildflower seeds and raking them in.

The School Council also gave Maria and Cllr Still a tour of their extensive outdoor facilities and their Forest School.

Maria said: “I was really pleased to join the pupils and staff at Great Binfields Primary School to plant the first Pollinator Patch as part of the Wilder Chineham and Sherfield Park initiative. It was lovely to see the children’s enthusiasm for the scheme, and to hear about everything they are doing in the school to protect and improve the environment.”

“It was also a pleasure to see the fantastic outdoor facilities at the school, which are not only very enjoyable for the children, but also encourage them to develop new skills and take more exercise.”

Cllr Elaine Still said: “It was wonderful to help plant the wildflower seeds at Great Binfields and meet the children, who showed a real passion for protecting their local environment. As I said to them, it’s important that we look after nature, then nature will look after us.”

The “Pollinator Promise” is a wildflower planting scheme to support more bees and other pollinating insects, and was initially developed by a Primary School in Havant, supported by the Hampshire and Isle of Wight Wildlife Trust (HIWWT).  Maria held a community meeting earlier this year, with the Wildlife Trust and Cllr Elaine Still, to explore what a “Wilder Chineham and Sherfield Park” might look like, and it was agreed at the meeting to adopt the “Pollinator Promise” by planting small patches of wildflowers in public spaces, and also encourage residents of Chineham and Sherfield Park to plant “pollinator patches” in their own gardens.

In addition to the planting at Great Binfields Primary School, Maria will be helping with the planting of “Pollinator Patches” at other locations in Chineham and Sherfield Park in the coming weeks.

The Chineham Conservation Group, supported by Natural Basingstoke and the HIWWT, have led the initiative, with planting taking place in late September/early October. Local residents in Chineham and Sherfield Park who still wish to participate in the scheme can do so by removing one square metre of turf from their gardens, and planting wildflower seeds, which are available free of charge if they register with the Chineham Conservation Group at pollinator.patches@gmail.com. Seeds will come with planting and care instructions.