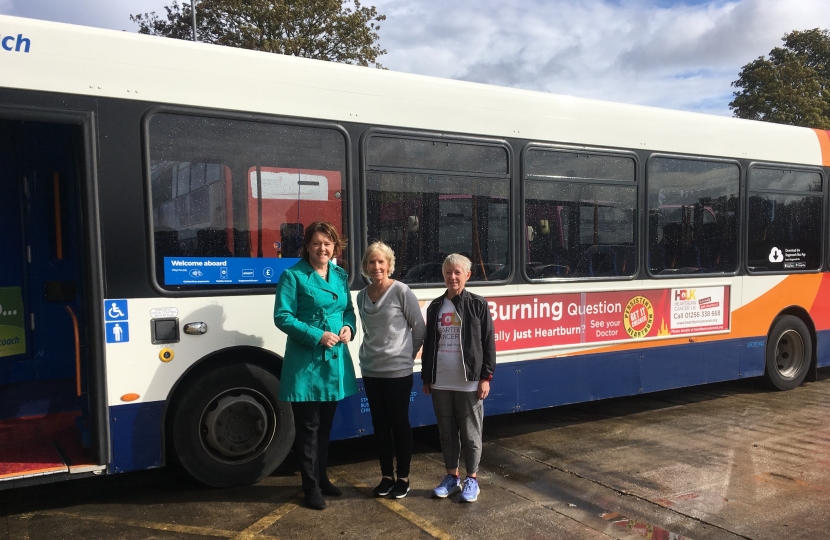 Local MP Maria Miller joined Heartburn Cancer UK, a charity based in Basingstoke, to help launch their new awareness campaign. The campaign hopes to save lives by getting more people to question – and act on – a very common condition, which can be an early warning sign of oesophageal cancer.

Despite medical advances, the UK still has the highest levels of oesophageal cancer in the world.  Every year some 8,000 people die in the UK from the disease – 1 a day in Hampshire.  It is also the 4th biggest cause of cancer deaths among males. This is blamed mainly on late diagnosis.  People are unaware that simple, straightforward heartburn should not merely be dismissed. It can be an early symptom of the disease, and getting it checked out – if it stays for more than three weeks – could save lives.

To encourage more people to question the condition, Heartburn Cancer UK has launched ‘The Burning Question’ Awareness Campaign.  The campaign will raise awareness to prevent deaths from the disease by spotting the early warning signs. Following radio adverts, the next stage of the campaign has been to launch bold advertising on buses and at train stations.

Maria, who is a Patron of Heartburn Cancer UK, met up with the charity’s Chairman Mimi McCord, along with Beryl Huntingdon and other members of the HCUK team at the Stagecoach bus depot in Rankine Road, for a press launch for the advertising on the buses.

Maria said: “Detected early, oesophageal cancer can be cured, but it can often be mistaken for heartburn. If you suffer from persistent heartburn, for more than three weeks, please see your doctor to get it checked out.”

“It is really important to raise awareness of this type of cancer, and I hope that people in Basingstoke, seeing the advertising on the side of the buses, will think about it and, if necessary, act on it.”

More information can also be found on the Heartburn Cancer UK website athttp://www.heartburncanceruk.org