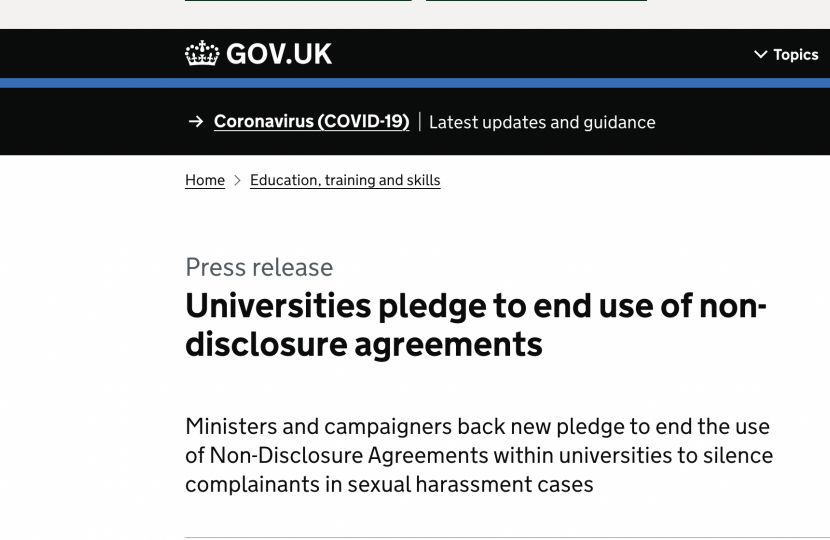 Victims of sexual harassment in universities should no longer be silenced by Non-Disclosure Agreements (NDAs), under a new pledge backed by the government, universities and campaigners.

The Government has announced plans to bring in new legislation to crack down on the use of NDAs in employment, following a consultation by the Department for Business, Energy, Industry and Skills. Efforts to tackle the practice have been championed by former Equalities Minister Maria Miller MP, who welcomed the new pledge at its launch.

Today six university vice-chancellors invited to attend the launch have signed up to a pledge promising not to use NDAs in dealing with complaints of sexual misconduct, bullying, and other forms of harassment – as Higher Education Minister Michelle Donelan calls on all universities to sign up.

The pledge, backed by MPs and campaign groups, commits universities to not use legally-binding NDAs against students and staff who come forward to report abuse, amidst fears victims are being pressured into signing agreements which stop them from speaking out and protect the reputations of perpetrators.

In 2020, a BBC News investigation found nearly one third of universities had used NDAs to resolve student complaints, involving over 300 individual NDAs – though the true figure is expected to be higher.

Sexual harassment is horrendous and complainants should never be bought or bullied into silence simply to protect the reputation of their university. Such agreements make it harder for other victims to come forward and help hide perpetrators behind a cloak of anonymity.

The use of Non-Disclosure Agreements to buy victims’ silence is a far cry from their proper purpose, for example to protect trade secrets. I am determined to see this shabby practice stamped out on our campuses, which is why last year I wrote to vice-chancellors making my position clear.

Several university leaders have signed a new moral contract to end the use of Non-Disclosure Agreements against students and staff, and I call on other vice chancellors to do the right thing and follow their lead.

The pledge was welcomed by #Can’tBuyMySilence, a global campaign set up by former Harvey Weinstein aide Zelda Perkins and Canadian law professor Julie Macfarlane, which aims to end the harmful use of NDAs, and who attended the virtual launch of the pledge on Tuesday alongside Ministers and university leaders.

Zelda Perkins and Julie Macfarlane, the co-founders of Can’t Buy My Silence, said:

We have seen up-close the damage caused by NDAs used by some institutions of further and higher education; damage to individual complainants who feel betrayed by their university, and damage to trust among institutions when a wrongdoer is “passed on” protected by an NDA.

We are delighted that Minister Donelan is asking universities to condemn this practice and pledge not to use NDAs in the future. This will dramatically change the accountability and transparency of universities and improve the lives of students, staff and faculty by helping to break the cycle abusive behaviour perpetuated by these agreements.

In July 2021, Minister Donelan wrote to vice chancellors urging them to tackle sexual harassment and abuse on campus, making clear all institutions must have robust procedures in place to deal with complaints and setting out her stance on the use of NDAs.

After years of campaigning to end sexual violence on campus NUS welcomes this timely announcement by the Universities Minister. Non-Disclosure Agreements have long been used to intimidate survivors, protect perpetrators and enable cycles of abuse to continue.

We urge all institutions to sign this pledge, bring much needed transparency to how they deal with complaints about sexual violence and commit to creating truly safe and supportive campuses for students and staff.

A number of universities had already signalled plans to end the use of NDAs in sexual harassment cases, with UCL confirming in 2019 it would end the practice in any settlement agreements with individuals who complained of sexual misconduct, harassment or bullying.

We are all too aware that sexual harassment, bullying and misconduct takes place in universities. When this occurs, it is crucial that victims feel supported and able to speak out about their experiences.

Confidentiality clauses are a barrier to this and that is why we took the decision in 2019 that we will no longer use NDAs in settlement agreements with individuals who have complained of sexual misconduct, harassment or bullying.

Universities have a duty of care towards their students and staff and take very seriously their responsibility to ensuring that life on campus is a fulfilling, safe and enjoyable experience for all.

The overwhelming majority do have this positive experience, but in the small number of cases where episodes of harassment or violence sadly do occur, it is critical that victims feel supported and confident to speak out.

Universities should not use NDAs or confidentiality clauses in settlement agreements in harassment cases, or allow any agreements which prevent open conversations about harassment. Such clauses can be barriers to the reporting of concerns and are both unethical and unacceptable.