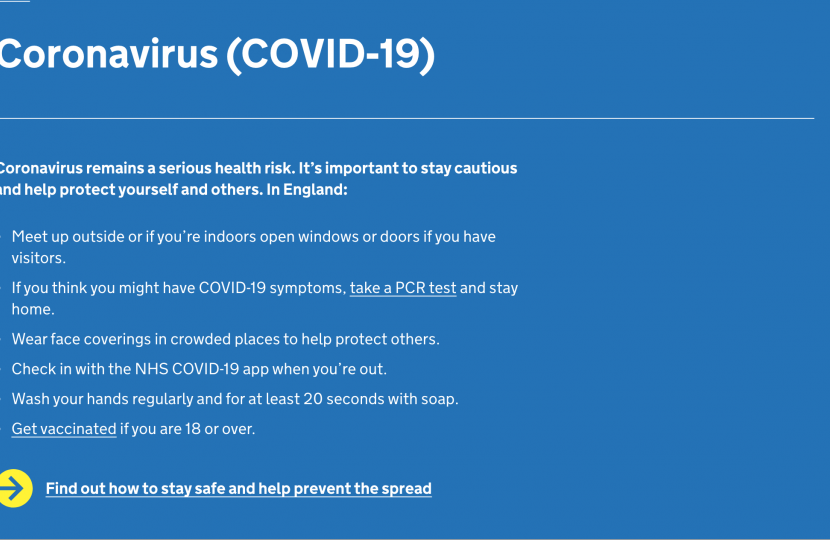 England has moved to Step 4 of the roadmap. Everyone should be cautious while managing the risks as cases of COVID-19 remain high. Find out what you should do to protect yourself and others.

Fully vaccinated people returning to England from most amber list countries will not need to quarantine.

If you’re fully vaccinated or under 18, you will not need to self-isolate following close contact with someone who has COVID-19. You’ll still need to take a PCR test and self-isolate if it’s positive.

The roadmap out of lockdown in England

See all coronavirus guidance on GOV.UK

Local MP welcomes ongoing support from Hampshire County Council for Basingstoke residents if they are having a difficult time due to COVID-19 or because they are self-isolating.

From Tuesday 30 November, face coverings will be mandatory in shops and on public transport and all travellers returning to the UK will require PCR testing.

The Department for Education (DfE) is providing funding to local authorities to coordinate a programme that provides healthy food and enriching activities to disadvantaged children during the 2021 Summer & Christmas Holidays.

Basingstoke’s MP - update on step four of the Roadmap.

Yesterday the Prime Minister announced a pause to step four of the Roadmap out of lockdown by four weeks, as Delta variant which is now spreading faster than the third wave predicted in the February, has seen cases growing by about 64 per cent per week and in the worst affected areas it is doubli

Following Government approval received today, Basingstoke’s MP, Maria Miller has welcome community testing scheme for Hampshire residents who are asymptomatic and are  going out to work will start across the county this week.

Basingstoke’s MP Maria Miller has welcomed the Government’s plans to make it even easier for employers of all sizes to join its flagship £2 billion Kickstart Scheme, which has already created more than 120,000 Kickstart jobs across the UK.

Local MP welcomes progress on Plan for Jobs, to help businesses bring staff back from furlough, create new jobs, and invest in skills to help people get on in their careers

Local MP welcomes progress on Plan for Jobs,  to help businesses bring staff back from furlough, create new jobs, and invest in skills to help people get on in their careers.

Funding support is now available from Basingstoke and Deane Borough Council for businesses who were not eligible for other government funding during the latest round of COVID national restrictions.

Local MP “Following the rules together we can get out of these tough measures.”

Local MP “Following the rules together we can get out of these tough measures.”

The Government has announced that Hampshire has been placed in Tier 2 High Alert - local covid restriction level in order to safeguard the gains made during the period of national restrictions.

Local MP Maria Miller has welcomed Borough Council’s helpline for vulnerable residents across the borough to register for support such as access to food and medicine during the nationwide lockdown.

This coronavirus (COVID-19) RSS feed is being replaced with a new feed from Search - GOV.UK

Guidance: Regulatory status of software (including apps) used in the diagnosis, treatment and management of patients with coronavirus (COVID-19)

Advice for manufacturers, members of the public and professional users of software or apps being used during the COVID-19 pandemic.

Guidance for industry on flexible approaches to regulation we are taking during the COVID-19 outbreak.

From 15 June, face coverings will be required while using public transport in England.

Detailed guide: Number of coronavirus (COVID-19) cases and risk in the UK

The latest number of coronavirus (COVID-19) cases and risk level in the UK.

Face coverings will be required on public transport from 15 June 2020.

A partnership between UK aid and Gavi: the Vaccine Alliance, is supporting the Government of Ghana to use Zipline drones to collect coron

Mandatory guidance on the criteria that organisations must meet to provide initial teacher training (ITT).