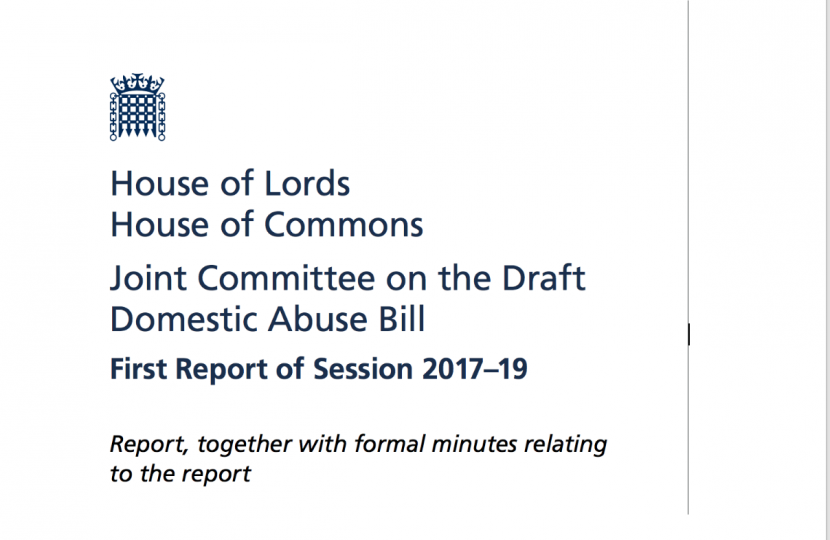 The recommended changes to the Bill are to ensure that all those affected by domestic abuse receive protection and a tailored response to their differing needs. The Committee welcomed the proposed measures in the Bill, but was concerned with ensuring their effectiveness in practice.

The Committee was particularly concerned to ensure that children who experience domestic abuse, either as witnesses to it or in intimate relationships, are treated as victims and their needs responded to appropriately. In recognition of the fact that survivors of abuse require different support services, the Committee recommended that the Bill should require public authorities to have regard to the gendered nature of abuse and provide suitable services accordingly.

The Bill would establish the role of Domestic Abuse Commissioner to promote best practice in providing services to survivors and perpetrators of domestic abuse. Because of concerns that the Commissioner would not be sufficiently independent of the Home Office and would not have power to enforce recommendations on those providing public services, the Committee put forward several changes to the Bill to increase independence, concluded that government departments should be included among the bodies which would have a duty to co-operate with the Commissioner.

The Committee recommended that the lead Minister on implementing the strategy on domestic abuse should be based in the Cabinet Office, not the Home Office. This was to encourage cross-departmental and multi-agency working and to support the independence and reach of the Commissioner. The Committee considered that overall there should be a complete review of the approach taken to establishing Commissioners offices with independence built into each by using the Cabinet Office as the sponsor department.

Other recommendations for changes to the draft Bill before it is brought back to Parliament include:

“The Government’s draft bill on Domestic Abuse has been widely welcomed by organisations representing survivors of Domestic Abuse and those providing support services. The Bill is the culmination of many months of work and consultation and has been said by the sector to be a ‘once in a generation opportunity to address domestic violence’ and having ‘the potential to create a step change in the national response’.

“The committee has made detailed and wide-ranging recommendations that affect many aspects of the Bill, drawing from the excellent evidence we have received including oral evidence from those who have survived domestic abuse themselves. These include important recommendation relating to the treatment of children and migrant women, the importance of cross-departmental working in prevention and early intervention and the need for Commissioners to be fully independent and have the powers they need to enforce improvements in the provision of services.”

Conservative Home - Maria Miller: Domestic abuse can stretch on for a lifetime. So why do we stop recording it after the age of 74?

This article appeared on Conservative Home

Following extensive consultation last year, on 21 January 2019 the Government published a draft Domestic Abuse Bill together with Explanatory Notes and a response to the consultation. The Government also proposed a package of measures to sit alongside the legislation.

The House of Commons and House of Lords have jointly appointed members to a committee to scrutinise the Draft Domestic Abuse Bill.

Members appointed to the Committee by the House of Commons are: